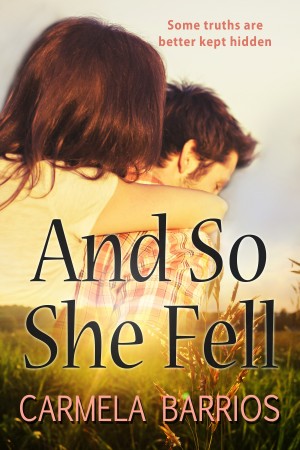 And So She Fell

By Carmela Barrios
Vanessa Bennett hated it when her father sent her to the middle of McNowhere Ville, Texas to finish the remaining six months of her Senior Year. But she couldn't do anything but agree for Art School would not be just a dream if she completed this deal her father gave her. She thought it was all that was left of her, but meeting Jackson Matthews would show her that there is more to life. More
Synopsis

Vanessa Bennet was in the car when her mom lost her life in a tragic ‘accident’, with her mom’s words ‘I’m sorry’ burned in her memory. Years later, her boyfriend was murdered. She witnessed all of these deaths, right in front of her. But the worst part is, she survived. Her father blamed her for her mother’s death. Their ghosts haunted her dreams.

She knew all too well that allowing herself any form of attachments to somebody else would only end up with her, picking up shattered pieces of her heart with bloody fingers. And twice is enough, Vanessa didn’t want any more part with that.

But then her father sent her to Willacy, Texas to finish the remaining six months of her senior year. She hated her predicament though she couldn't do anything but to agree; for Art School would not be just a dream if she completed this deal her father gave her. And that’s where she met Jackson Matthews, the son of the cattle ranch owner where she would spend the rest of her senior year.

He’s cocky. He thinks he’s funny. He is full of himself. But Vanessa couldn’t help but admit that Jackson Matthews showed her that there is more to life than loss. He promised he’d catch her if she falls.

Now she’s just waiting for life to test that promise.

However there’s more to her mother and boyfriend’s death that is yet to be uncovered. Sometimes, secrets are too dark that they are better left alone. But those dark secrets can’t stay hidden forever; it would always find its way to visit Vanessa and remind her what loss is, again.

Even at a young age, Carmela Barrios has always been a story teller. She wrote her stories in a notebook, allowed her siblings read it and then they loved it, asking her to write more. For her, they are not just characters that her mind conjured, they are people whose voices and stories needed to be heard, waiting to be told.

Aside from that, she found books as an escape from reality.

Carmela believes in fairy tales, happy endings and forever but she knows it will never be easy. To achieve great things, hard work is required. She doesn't believe in sitting around and waiting for the right guy to come, real life doesn't work that way. One should make sure she is the right girl instead.

It was on July of 2012 when Carmela joined an online community called Wattpad, mainly to read great stories from unpublished authors. It was a great experience. Reading all those stories encouraged her to post her own. It was scary, to make yourself vulnerable, to let people read what's running in your head but Carmela knows that the people inside her head needed to be heard. She doesn't care if people won't vote or comment, she just wants it out there, out in the open. Since then, her works had garnered reads and votes from people who found her stories both entertaining and empowering, that's how her dream to influence people's lives through her stories started. She wanted to empower people to be better, to learn from her craft and be great.

She mainly writes about romance, making it as realistic as possible. Her characters don't always make the right decisions or choose the best choices but that's how people are, we don't know what's certain in this life. This journey would always be a matter of trial and error and Carmela incorporates that in her books.

You have subscribed to alerts for Carmela Barrios.

You have been added to Carmela Barrios's favorite list.

You can also sign-up to receive email notifications whenever Carmela Barrios releases a new book.