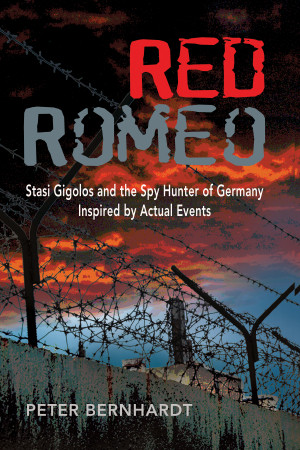 Red Romeo―Stasi Gigolos and the Spy Hunter of Germany

Just as she thinks she’s gaining the upper hand, Sabine’s worst fears are realized. The Stasi has infiltrated the highest ranks of West German intelligence and Heinrich’s well-placed mole is watching her every move. With the number of women spying for love growing by the day, Sabine risks everything on a cutting-edge technology that promises to identify traitors.

The ingenious system soon picks up the scent of Stefan, who is targeting the Chief of the Chancellery’s secretary. But when Sabine discovers that Stefan has an agenda of his own, she lays a risky trap. With the security of the West at stake and Stefan’s life hanging by a thread, she gives her all to unmask the mole and outwit the Stasi spymaster.

What Bernie Silver, author of Nathan in Spite of Himself, says about Red Romeo:
You’ve heard it all before but in Red Romeo’s case it’s true. The novel is fast-paced, suspenseful and features plenty of intrigue, to say nothing of intriguing characters. Plus it offers copious romance (though of a somewhat duplicitous nature). Suggestion: wear gloves so you don’t bite your nails off.

As I approached my prime, I developed the powerful urge to write thrillers. My wife harbored the absurd suspicion midlife crisis had struck. I was bound in those days to courtroom and desk at the U.S. Attorney’s Office, so my dream remained just that for a long time. When I retired, though, we moved to Arizona and I took things in hand by enrolling in a workshop for wannabe authors.

The workshop was a bust, but it did push me into tackling my first book, The Stasi File – Opera and Espionage: A Deadly Combination, in which I wove together the unlikely combination of my German upbringing, a lifelong love of opera and my experiences as an attorney. Soon the challenge of creating characters and building an intriguing plot filled my waking hours, and a few sleeping ones too. “My” characters and their actions took over, leaving me to serve as their scribe and menial servant. I was on my way and what a journey it has been!

In The Stasi File: Opera and Espionage—A Deadly Combination, a Washington trial lawyer and his former lover, an aspiring opera diva, are drawn into an assassination plot by a Stasi General desperate to prevent the collapse of the East German police state after the fall of the Berlin Wall. A quarterfinalist in the 2011 Amazon Breakthrough Novel Award, The Stasi File was named a finalist for Book of the Year and ranked a bestseller on the former British-Arts-Council sponsored critique site YouWriteOn. Reader comments compare the novel with those of Clancy, Ludlum and Follett.

The sequel, Kiss of the Shaman’s Daughter, pits Stasi File protagonists, Sylvia and Rolf, against ruthless smugglers of Indian artifacts during Sylvia’s engagement at the Santa Fe Opera, interweaving as subplot the story of a shaman’s young daughter, Teya, who played a crucial in the Pueblo Indian Revolt of 1680 against the Spanish, and perhaps concealed the legendary treasure of a lost pueblo.

The fierce Cold War espionage battle between East– and West Germany inspired me to write Red Romeo, in which West Germany’s premier spy hunter, ambitious Sabine Maier, faces off against ruthless Stasi General Werner Heinrich. Sabine has filled half a prison with communist spies, while Heinrich is the mastermind behind an army of spy gigolos who prey on lonely women working in the West German government’s most secret divisions. Caught in the middle is ladies’ man Stefan Malik, a reluctant Romeo, forced to do the general’s bidding or rot in a Stasi prison.