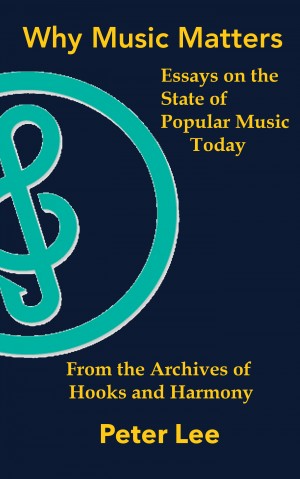 Why Music Matters: Essays on the State of Popular Music Today

By Peter Lee
From his love of the Cure to his hatred of Auto-Tune, author Peter Lee of Hooks and Harmony writes about music in a way that's engaging, funny and poignant. More
What's wrong with today's music? What was so good about the music of previous generations? And how do we try to relay the meaning of melody, harmony, and just plain good music to our kids? In these series of essays from his website Hooks and Harmony (http://hooksandharmony.com), author Peter Lee laments the lack of originality in today's music, reminisces about how music and memory are forever linked, and recounts some of the overlooked bands of the last few years. Funny, poignant and at some times biting, Why Music Matters will educate and raise issues that will have music lovers discussing for a while.
Download: epub mobi (Kindle) pdf more Online Reader
rtf lrf pdb txt
Price: Free! USD
Add to Library
Create Widget
Tags: music music ebooks music ebook music education music criticism music and brain music and culture music journalism music appreciation music for kids
About Peter Lee

Peter Lee loves to write, loves music and loves to write about music. The son of an English professor and a librarian, he was headed for a career in science when a friend invited him to join the newspaper staff in college. The writing bug bit him and he changed his major, graduating from Berry College with a degree in journalism. He also holds a master’s degree in communication from Georgia State University.

Lee’s life also changed in 1980, when he first heard the strains of “Hey Jude” coming from a record player just weeks after former Beatle John Lennon was gunned down. He became a Beatles fanatic, learning all he could about the four as a group and as solo artists. His novel, The Death and Life of Mal Evans, is the product of his love and appreciation for the group and has taken more than 10 years to write.

A former journalist, Lee maintains a blog, Hooks and Harmony (www.hooksandharmony.com), which has been in publication since 2008. The site is dedicated to 80s music and melodic pop music very similar to the four lads from Liverpool.

You have subscribed to alerts for Peter Lee.

You have been added to Peter Lee's favorite list.

You can also sign-up to receive email notifications whenever Peter Lee releases a new book.