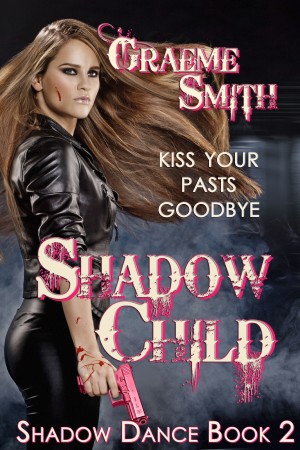 Thing is, the Cute Guy in the front row won’t stay dead, yesterday’s getting a bad habit of turning into tomorrow and Maya’s starting to think she doesn’t know jack. She doesn’t - but she’s going to find out real soon. Because Jack’s back.

Jack and Maya. Maya and Jack. Someone’s gonna die. Someone has to live. So sit down, put your head between your knees and kiss your pasts goodbye.

Price: $5.99
$2.40 USD
Buy with coupon Use the code AGB60 at checkout for 60% off during our site-wide promotion!
(Offer good through April 20, 2020 )
Have a better coupon?
Add to cart, then apply your coupon
Add to Library Give as a Gift
How gifting works
Create Widget
Tags: humor fantasy demons time travel kickass heroine girl assassin jack shadow
About Graeme Smith

Graeme Smith. Fantasy author. Mostly comic fantasy (which is fantasy intended to make you laugh, not fantasy in comics).

Having Graeme Smith as my pen name is convenient, since it also happens to be my real name. I might try to be funny and say my pen is called Graeme, but then I'd have to admit I don't use a pen. Maybe I should call my keyboard Graeme instead.

When I'm not writing (well, or editing my writing. Or re-writing. Or editing my re-writing. Or... Quite. You get the picture), I'm doing other things. Maybe things involving mushrooms. And knitting needles (but the less said about my cooking, the better). Maybe things like online gaming (If you know Bard Elcano, you know me. If you know a grumpy old dragon called Sephiranoth, you know me. If you know a tall, dark, handsome but brooding vampire, charming witty and brilliant - we never met. That's someone else.)

So there you are. Graeme Smith. Me. Short, fat, bald and ugly (fortunately my wife has lousy taste in men). Time was, I worked on a psychiatric ward. Now I write about people who believe in magic and dragons, and who live where the crazy folk are the ones who don’t.

About the Series: Shadow Dance

Jack Shadow. He’s heard them – every one of them. The jokes. They all start out the same. "See, this guy walks into a bar..." Well, that's not him. That guy who walked into a bar.

He’s the guy who walked out.

It's not amnesia. Near as anyone knows, he just doesn’t have a past. Near as anyone knows - or admits to. He doesn’t walk round a corner, and some guy from a car shoots at him because of something he did long ago. Sure. Guys shoot at him. Hell, women too. But not for long ago. Mostly for last week. Where 'last week' is any week you choose. No, he just walked out of a bar.

Were there piles of dead bodies behind him? A stacked deck he was dealing, or one he was dealt? He doesn’t know. Or care. But they were waiting, and they took him. The Dragon. Took him to make a difference. To wait for the time a beat of a gnat's wing could change tomorrow. And Jack’s the gnat.

Jack walked out of a bar. The rest - the rest will be history. Some day. Not that he’ll be in it. Nobody remembers the gnats. Not if they did their job right. And Jack’s the best there is.

Jack Shadow. Because some days – the last thing you need is a good guy.

You have subscribed to alerts for Graeme Smith.

You have been added to Graeme Smith's favorite list.

You can also sign-up to receive email notifications whenever Graeme Smith releases a new book.