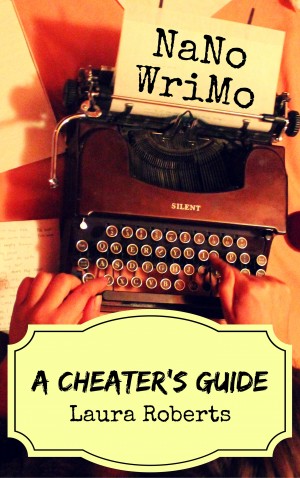 By Laura Roberts
Rated 5.00/5 based on 1 reviews
Never won National Novel Writing Month (NaNoWriMo) before? Struggling to figure out what you're doing wrong?

You need to start cheating. More
Never won National Novel Writing Month (NaNoWriMo) before? Struggling to figure out what you're doing wrong?

You need to start cheating.

Your mother may have told you that "cheaters never win, and winners never cheat," but put that bunkum aside.

Winners use the tools to their own advantage.

And winners sure as hell don't believe that writing "The End" just because you hit 50K means you wrote a successful novel.

The Cheater's Guide to NaNoWriMo will hold your hand through all of the tips, tricks, cheats and hacks you'll need to finally finish that novel, get it off your hard drive, and publish it where real people can actually read it.

You may not become the next Stephen King, but you WILL finish your novel and win NaNoWriMo this year.

Ready to learn how? Join the Cheaters and beat the system.

Laura Roberts has written an entire novel in just three days, writes steamy romance under the pen name Laure L’Amour, and publishes books that press buttons at Buttontapper Press. She currently lives in Sacramento, California with her artist husband and their literary kitties. When she’s not writing, she can be found editing manuscripts for indie authors, transcribing reality TV, watching romcoms, testing chocolate recipes, or searching for more typewriters to add to her collection.

Blurring the lines between fact and fiction, Laura has penned 18 books for adults, including the alphabetical travel guides Montreal from A to Z and San Diego from A to Z, the offbeat writing guides NaNoWriMo: A Cheater’s Guide and Confessions of a 3-Day Novelist, the satirical adventure tale Ninjas of the 512, and various steamy romances under the pen name Laure L’Amour, as well as three nonfiction career guides for young adults (Careers in Gaming, Careers If You Like Music, and Careers in Digital Media) published by ReferencePoint Press. She has also contributed shorter works to the following anthologies: The San Diego Writers & Editors Guild’s 5th edition of The Guilded Pen, Diane Lee’s nonfiction collection The Secret Lives of Writers, the David Bowie/Alan Rickman tribute anthology Stardust, Always; Shawna Kenney’s Book Lovers: Sexy Stories from Under the Covers, Ironology 2014: The Iron Writer Championship Series, and Drabble Harvest #14: Extraterrestrial Reincarnation. In addition to her writing, Laura is the editor of the poetry collection Haiku for Lovers and the ethnomusicological anthology Everything I Need to Know About Love I Learned from Pop Songs, and the founder of the literary magazine Black Heart.

You have subscribed to alerts for Laura Roberts.

You have been added to Laura Roberts's favorite list.

You can also sign-up to receive email notifications whenever Laura Roberts releases a new book.