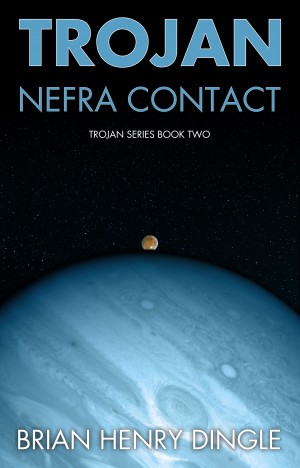 Rated 3.00/5 based on 1 reviews
War-torn Earth turns its attention to the sudden appearance of a ‘moon’ around Jupiter. Two sets of heroes, one from Earth and one from the ‘alien’ planet Nefra meet on this distant outpost, presenting Earth with its First Contact, representing a struggle on both sides to stay alive. More
The moon of Jupiter named Trojan was discovered in 2025, and explored by Earth astronauts shortly thereafter, as it appeared to represent a threat for an alien power. As United Nations Space Administration (UNSA) sets out to make international, perhaps interplanetary, claims over this alien phenomenon, they realize the moon is hollow, and harbors some sinister concern for the survival of Earth.
Two sets of explorers, one convicts sent from Nefra to set up gravitational transportation, the other astronauts from Earth, explore this new world, and interact in a way neither their respective powers had ever expected.
This could be the beginning of interplanetary piracy and war, or it could be the beginning of reunion; or it could be just the beginning of the end.

Dr. Dingle is an Internist and Hematologist, working in Medical Oncology at the London Health Science Program of Schulich School of Medicine and Dentistry, Western University, London, Ontario, Canada. He has practiced this specialized discipline of Medicine for over forty years. He is still engaged in clinical medicine, teaching of undergraduates and post-graduates, research and in the past, administration. His past administrative responsibilities have included nine years on the College of Physicians and Surgeons of Ontario, several years promoting and developing the Grand River Regional Cancer Centre in Kitchener, Ontario, and Chief of Oncology and Senior Medical Director of the Oncology Department at the London Health Sciences Centre.
Brian Dingle holds a third degree (Sandan) black belt in Shidokan karate, and a fourth degree (Yondan) in Chito-Ryu karate, and is one of the founding directors of the Grand River Karate which continues (alas, without him) to this day. His undergraduate degree was in Physics and Mathematics at University of Toronto, and he obtained a Masters degree in Pharmacology while completing his Medical Degree at the same university.
Dingle lives with his wife, Vikki, in London, Ontario, and has three children and two grandchildren.
Dr. Dingle is the author of two books in his Trojan Series, and has published one (posthumously) of his father-in-law's, Dr. Harold Warwick.

About the Series: TROJAN

In a near future world created from the reuniting of two disparate groups of Humans, worlds and years apart, the Earthsiders and Nefra come together in a hollow metallic moon called TROJAN.

Nefra (a Yenna word for humans with tails) have some advantages over typical Earthsiders, with large muscular tails, pheromone scenting, and greater life-span. But their world is collapsing under militaristic government and man-made pollution, and so they seek re-union with their origins.

Trojan is large, dense, and hollow. Nefra have developed gravitational technology that far exceeds Earth knowledge, and hints at inter-galactic travel, and perhaps even time travel, to which Trojan, a space-time flat environment, is the key.

Tension between Nefra and Earthsiders ultimately produces Trojans, the gritty people who live inside the hollow moon: the outpost of Earth, the beachhead of Nefra, the world famous weightless hospital serving the most severely injured from both sides, and the promise of greater joint efforts still to come.

Join us in exploring this fascinating new world and its people.

Brian Henry Dingle’s Trojan: Nefra Contact is a first contact story with a twist, between a pair of Nefra convicts and a UNSA team exploring a very new moon that appeared out of nowhere in Jupiter orbit. Mer, a Nefra whose intellect and desire to learn are in direct conflict with the worker class he was born into, has been imprisoned and sentenced to death by hard labour along with his friend Elper, far from the planet of his origin, for having exhibited the ability to read. Major James Edward Garth, of the UNSA, is about to have an unusual experience with the Law of Gravity, and these events will completely alter both their lives.

Trojan: Nefra Contact is a well-conceived science-fiction / adventure story, featuring some unique characters and strong plot twists. In some areas, the author’s depth of research on the scientific aspects has a tendency to take over the storyline, but overall, the story holds together despite the point of view slips into the omniscient. The suspense and action are well-paced, and the interaction between the characters offers welcome leavening to the book, along with well-set descriptions of space and the basic mechanics of moving and working in a space suit. Definitely a good read for readers of science-fiction or adventure.

You have subscribed to alerts for Brian Henry.

You have been added to Brian Henry's favorite list.

You can also sign-up to receive email notifications whenever Brian Henry releases a new book.