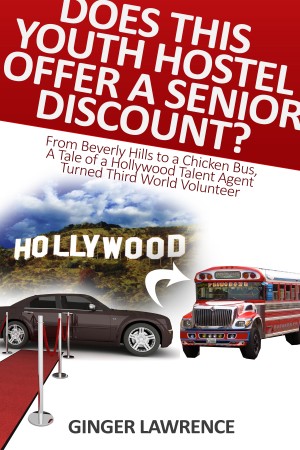 Does This Youth Hostel Offer a Senior Discount? From Beverly Hills to a Chicken Bus, A Tale of a Hollywood Talent Agent Turned Third World Volunteer

By Ginger Lawrence
Ginger Lawrence grapples with colorful volunteer exploits in Latin America. She chucks a pampered would-be glamorous life as a Hollywood talent agent to teach English to the poverty-stricken children of the garbage dump, trading glamour for a lump-in-the-throat life-altering experience, while finding unlikely romance with a passionate Latino 30 years her junior. More
You can take scary risks--even when you’re well over that fabled hill. Fish-out-of-water Ginger Lawrence grapples with colorful volunteer exploits in Latin America. Ginger is not a typical volunteer on her Gap year. This book is the surprising journey of a woman of “a certain age,” chucking a pampered would-be glamorous life as a Hollywood ten percenter to live in an elbow-to-elbow Guatemalan house while teaching English to the poverty-stricken indomitable children of the city garbage dump.
After decades of babysitting actors’ oversized egos, aware that children in Latin America are living ten to a rain-soaked mattress, she abandons life in Los Angeles to see if she can lend a hand. Ginger reasons perhaps, instead of donating money to philanthropic organizations, she can donate herself. Enticed by combining her thirst for travel with helping others, she considers volunteering abroad.
It’s possible to change your second--or even third--act. The reader tags along as Ginger ditches her seemingly dazzling show business life, representing actors for motion pictures, television and theatre, for a lump-in-the-throat, life-altering experience.
This book is about alternatives and uncharted territory: loneliness in strange countries, safety in places where danger headlines the newspapers, and teaching English to children who barely know the basics of their native language.
Ginger finds meaningful fulfillment in the underprivileged schools, and also unlikely passion with a hot-blooded penniless 32-year old Latino who speaks only six words of English.
Timid and bashful, with minimal Spanish language skills, she travels alone to Latin America to change the world—one English student at a time. Latin America changes her first.
Does This Youth Hostel Offer a Senior Discount? is a chronicle of a cosmopolitan woman adjusting to life where chickens wander the dusty streets. Leaving the circus of Hollywood behind to lodge in youth hostels and home stays in Guatemala, Ecuador and Nicaragua, 65-year-old Ginger struggles to keep up with fellow volunteers who could be her children (or grandchildren), eventually befriending an assortment of international travelers who climb volcanoes and dance salsa ’til dawn. Against a vibrant backdrop, she finds living and working in Latin America to be poles apart from her usual If It’s Tuesday, This Must Be Belgium mode of travel; her neighbors wave “Buenos días” every morning; the kids playing soccer on the corner call her by name.
Arriving in Guatemala with misgivings, she learns not to just cope but to revel in reserves she doesn’t know she has. After a challenging but fulfilling experience, Ginger regroups with her family in the United States. But she’s caught the volunteer bug. Now somewhat experienced, she’s better equipped to teach in Ecuador. Her former husband’s brain surgery requires an unplanned return to Los Angeles from Quito, but once Jack’s health improves, Ginger eagerly dives into a volunteer organization in Nicaragua. Living in Third World countries requires a particular attitude adjustment; Ginger learns to simply smile when the electricity—and then the water—go out citywide in her Nicaraguan pueblo.
Does This Hostel Offer a Senior Discount? is a candid, lighthearted, and original book for grown-ups. People fantasize about escaping their lives. And they like to read about other people actually doing it. Think Eat, Pray, Love, and then add 30 years.
After significant work in TV and feature production with such luminaries as Johnny Carson, Elizabeth Taylor, and Orson Welles, and launching a personnel agency specializing in the entertainment industry, Ginger Lawrence was a theatrical agent for 23 years, representing actors such as Maggie and Jake Gyllenhaal, Edward James Olmos, and Kelsey Grammar. She has a degree in Telecommunications from the University of Southern California.

Ginger Lawrence has been a volunteer English teacher in the poorest communities of Guatemala, Ecuador, and Nicaragua for nine years. She teaches in Latin America for the length of her ninety-day visa, and then returns to the United States to catch up with her grown children, Jamie and Brian, and grandkids, Riley, Quinn, and Duke.
While in the United States, Ginger teaches English and volunteers with Spanish-speakers, contributing her time to organizations such as the Beverly Hills Library Literacy Program; Mentoring our Children Through Experience; Dave Eggers’ 826 LA; KOREH LA, an elementary school literacy program; Harmony Project; and several years at CARECEN, the Central American Resource Center, where she teaches Citizen Preparation as well as English. She’s had to do a lot of boning up on her high school history and government.
Ginger was a theatrical agent for 23 years, representing actors for motion pictures, television, and theatre. Many of her clients were renowned actors, such as Jake Gyllenhaal, Maggie Gyllenhaal, Edward James Olmos, Bryan Cranston, Kelsey Grammar, Marion Ross, Danny Aiello, Ruby Dee, and Ossie Davis. For ten years she was president and founding partner of Good People, a personnel agency specializing in the entertainment industry. She also worked extensively in TV and feature film production, assisting such luminaries as Johnny Carson, Bing Crosby, Perry Como, Elizabeth Taylor, and Richard Burton in secretarial, assistant, and script supervisor positions. The only person who ever fired her was Orson Welles; Ginger considers that a classy pink-slip.
Ginger was elected to and served on the board of the Association of Talent Agents for six consecutive years from 1988-2004. She was voted Agent of the Year in 2004 by the Personal Managers Association.
She graduated with a BA degree in telecommunications from the University of Southern California way too many years ago.

You have subscribed to alerts for Ginger Lawrence.

You have been added to Ginger Lawrence's favorite list.

You can also sign-up to receive email notifications whenever Ginger Lawrence releases a new book.