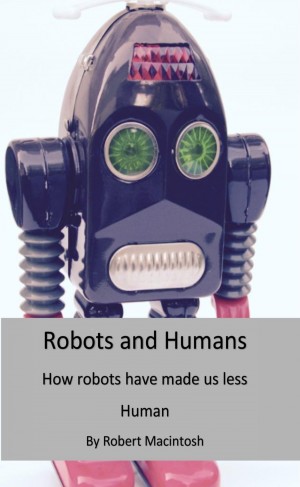 Robots And Humans: How Robots Have Made us less human.

By Robert Macintosh
A brief look at how technology and robots have changed humans, the work place, our lives and our world.

He enjoys TV scifi shows and classic movies from the 60's to modern scifi. This comes through in his stories. His stories have a very 'Twilight Zone' feel to them as he is a huge fan of the old show and felt like the writers were ahead of their time.

He has always had a fascination with robots, which are often featured in his writings.

He also grew up watching and is a fan of Doctor Who, The x-files and The Invaders.

The first story he wrote and published was a short story. 'My Parents Are Robots' as a way to experiment and explore with publishing ebooks. He has also published an essay entitled Robots and Humans: how robots have made us less human.

He is in the process of working on a full length scifi/thriller novel called 'A Serect From Space' due out in 2019-20.

Robert Macintosh is a pen name.

You have subscribed to alerts for Robert Macintosh.

You have been added to Robert Macintosh's favorite list.

You can also sign-up to receive email notifications whenever Robert Macintosh releases a new book.