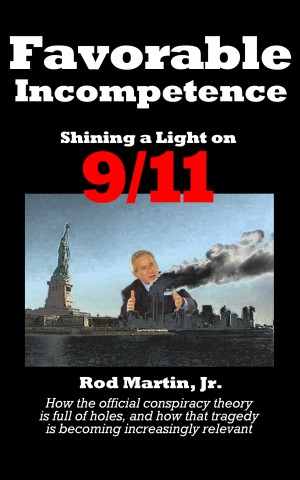 Top Military responsible for massive 9/11 security failures all received promotions instead of courts martial. More
Subtitle: Shining a Light on 9/11

September 11 is not merely a day which changed the world; it remains a raging inferno, creating new disasters every day. Because of this, 9/11 remains a current event. Ironically, the government tells us to pay no attention to conspiracy theories, but seemed to think nothing of broadcasting their own conspiracy theory a mere three hours after tragedy struck the Pentagon.

The facts don't add up. The Official Conspiracy Theory remains full of holes. We find evidence of cover-up and complicity on the part of the government.

This book gives a fresh look at the enigma that is 9/11. Not only does it debunk the Official Conspiracy (Bush) Theory, it handily debunks the so-called 9/11 debunkers -- the Fans of the Bush Theory. It covers a lot of old ground, but in a new way, and it provides a perspective that cuts to the core of what 9/11 is and why it remains even more relevant today.

Within the book, special sections of each chapter step outside of the normal viewpoint to explore, "Thinking Like the Perpetrator." Like is recent book, "Dirt Ordinary: Shining a Light on Conspiracies," Mr. Martin shows how the real 9/11 conspiracy gave its conspirators a great many benefits.

Every citizen of this planet should know what really happened on 9/11, who benefited and why. With all the evidence accumulated by tireless independent investigators, it's clear that Muslims did not do 9/11. It's clear that the pretense for war in Afghanistan was a sham as much as the fictional WMDs were in Iraq.

Psychopaths are loose on the world stage. They are playing a dangerous game. Everyone needs to know what that game is and what we can do to steer humanity away from oblivion.

Favorable Incompetence explores these topics and offers some startling options.

About the Series: Shining a Light

There are many misconceptions and outright lies in our modern world that pose as "common knowledge" or "common sense." For example, some people treat conspiracies as "fantasy," despite the fact that they are extremely common. This series exposes the lies and half-truths on a number of popular topics, including, conspiracies, 9/11 and Global Warming.

Also in Series: Shining a Light

You have subscribed to alerts for Rod Martin, Jr.