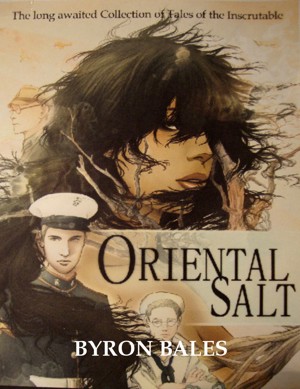 Oriental Salt "Tales of the inscrutable)

I was born in St. Louis in 1942. At 15, I dropped out of school and worked various jobs, one being a spotter for detectives conducting surveillances. In those late days of the 1950's, surveillances were low-tech indeed and in certain situations, where no photograph or other identification was available, it was preferable in low population areas for one operative to first 'spot' and plot a subject's movement pattern and then point him/her out for another detective or team to follow. Easy enough for an inconspicuous youngster to avoid suspicion.

The average detective, as a non-owner of an agency, earned around $10 a day. I was paid two dollars per spot. Until the day when the gumshoe assigned to the case eloped with a bottle of bourbon. I handled the surveillance, thereafter the agency owner, a tight-fisted, hard-drinking, crusty Irishman tried fobbing me off with the customary two bucks. I balked, an argument ensued, insults and physical threats exchanged, but I began receiving seven bucks per shadow.

The old detective drove home the point that this work was dangerous, and that an operative must maintain confidentiality at all times. Tell no one, he warned, absolutely no one as your life may depend on secrecy. He was fond of displaying an old bullet wound, claiming that he received it when certain criminal elements discovered he was a private dick. I eventually learned that the old shamus didn't want the authorities alerted to the fact that he was working an underage kid, and as for the bullet wound, the clumsy bastard accidentally shot himself in basic training during World War I.
In those days of conscription, the Army would have scooped up a dropout in no time, so I enlisted in the Marine Corps. Following Boot Camp in San Diego, I was posted a mere two miles away at the Naval Station right there in Dago handling base and brig security with the Marine Detachment. Eventually, I got what I'd requested in Boot Camp, a transfer to the First Marine Division's FMF-Fleet Marine Force. A fancy name for floating infantry. I picked up a secret clearance along the way and in addition to infantry duties (crew-served weapons; the old 3.5 rocket launcher), I served at various times as an interrogator. It was with an element of the 9th Marines (E-2-9) where I traveled around Asia, and later, during the Cuban Missile Crisis with the 5th Marines, I bounced across the Caribbean and Central America as a courier.

Discharged in 1963, I headed for New York City and gained an inspector's position in a retail credit organization. That led to my own P.I. license after the prescribed time. I handled every manner of criminal case; private and indigent (court-appointed defendants), surveillances, industrial undercover, bounty and repo work before specializing in insurance investigations, particularly locates and bogus death claims.

After working solo for 10 years, I formed a company in 1979 specializing in international claims work, particularly Life and Health claims, and more specifically; Questionable Death Claims and Disappearances. I began writing fifteen years ago, but never bothered with publishing anything until 2003, with The Family Business, by Asia Books. I'm retired, but I handle an occasional assignment, providing it's in Asia or Pacifica.

Reviews of Oriental Salt "Tales of the inscrutable) by Byron Bales

You have subscribed to alerts for Byron Bales.

You have been added to Byron Bales's favorite list.

You can also sign-up to receive email notifications whenever Byron Bales releases a new book.