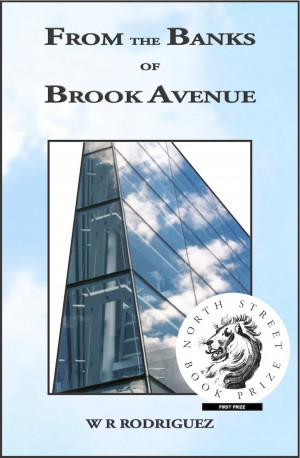 From the Banks of Brook Avenue

Subways, bridges, streets, public schools, parking meters, sewers, buses, baseball: these are some of the subjects explored by W. R. Rodriguez who has both a sense of history and a keen perception of the ordinary.

A large threatening man tapping knees on the IRT, a bus running over a pigeon, a dog chasing a broken car which is being pushed by a man, a woman dropping a flower pot on a mugger’s head, and other strange but true events combine with tributes to the Triborough Bridge, the Third Avenue El, and George Washington.

W.R. Rodriguez grew up in the Bronx where he worked as a bootblack in the family shoe shine parlor. He moved to Madison where he earned an M.A. in English and taught high school for over thirty years. The urban environment has been a major source of his writing: “Although I left The Bronx decades ago, it has not left me. To give ironic tribute to the Romantics, I regard the streets and tenements as worthy subjects of art. I enjoy creating poetry from my memories of people, places, and events, as well as from research and imagination. Also, I want my poems to work on the page and to have a strong voice if read aloud.”

His poetry has appeared in magazines such as Abraxas and Epoch, and in anthologies such as The Party Train, Welcome to Your Life, and Editor’s Choice III. Articles about his family’s experience in The Bronx were published in The Bronx County Historical Society Journal.

W.R. Rodriguez is the author of several books of poetry. His latest, from the banks of brook avenue, is an evolution of the work he began in the shoe shine parlor poems et al and developed in concrete pastures of the beautiful bronx.

You have subscribed to alerts for W.R. Rodriguez.

You have been added to W.R. Rodriguez's favorite list.

You can also sign-up to receive email notifications whenever W.R. Rodriguez releases a new book.