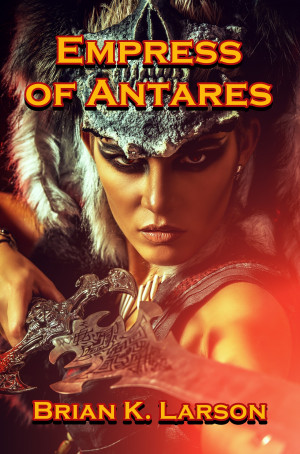 By Brian K. Larson
Missing scrolls, ties to Earth, hidden messages, and a choice that must be made to survive. Will the Empress of Antares choose the right path? More
The ancient Antarian scrolls spoke of legends regarding a female warrior from an unknown house. In this second installment, the life blood from the Beast of the Valley of Trenches can bring fortitude to the new Empress of Antares.

"Know that there will be two paths to take. One path will bring your own destruction, the other, the annihilation of Earth."

The Empress must choose the right path blindly, because of the missing scrolls. Will she choose the right direction, or will time run out on saving humanity from the Warlords? Join Admiral Jedediah Fitz and Major Race Jennings as they prepare for the invasion.

Brian was born and raised in Seattle in 1959. He grew up in the town of Mount Lake Terrace, a small suburb north of the city. Brian, being the youngest, had two siblings, his eldest brother, Mike and sister, Pam. School was challenging, as Brian suffers with Dyslexia, a learning disability that affects 1 in 15 Americans. That didn’t stop Brian. He was named "bookworm" in school because he always had his nose in a book.

Brian received his MBA in 2010 in Business, now writes for fun, living his lifelong dream of writing science fiction books. He enjoys his off time, with his seventh grade sweetheart, Diana Rose now for going on sixteen years. She has been by his side and continues to supports his writing. Brian says that without her encouragement, his dream would never have become a reality. They now live in Marysville, Washington, and enjoy three wonderful kids and eight grandchildren. They range from newborn to thirteen, and he says they are so special and great to have around.

It is Brian’s hope that through his writing he will fill hearts with joy to readers all over the world, sparking their imaginations.

About the Series: Warlords

The Warlords of Antares. Will Earth be able to fight off the the Antarian threat?

You have subscribed to alerts for Brian K. Larson.

You have been added to Brian K. Larson's favorite list.

You can also sign-up to receive email notifications whenever Brian K. Larson releases a new book.