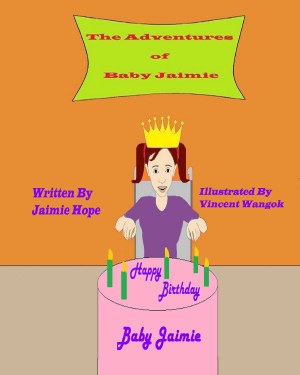 Jaimie Hope was born November 3, 1976, in New York. In high school, she joined the newspaper staff. The students weren’t given assignments as Hope expected. Instead, they were allowed to come up with their own topics. This gave the author her first real taste of freelance, and she loved it. This was when she decided she wanted to be a writer. This was also when the author first came up with her signature character, Baby Jaimie. However, it would be several years before the character was fully formed.
After graduation, the author went to college where she studied English and Psychology. In 1999, Hope received an Associate's degree.
In 2002, she moved to Florida where she was an active volunteer in the local historical society, which proved to be a turning point for the author. Up until that time she had all but forgotten her high school aspirations. However, being surrounded by so many creative people rubbed off on Hope. She soon found herself in the studio singing on demos and even singing back-up on a cd to benefit Vietnam veterans. It wasn’t long before she tried her hand at songwriting and even had one of her songs turned into a demo at a Nashville studio. During this time she also organized a book club, which re-ignited the author’s desire to write books. However, it wasn’t Children’s book that she started writing, she spent every free minute she had working on a Historical Romance novel. This wasn’t easy since she had also started volunteering at the local library as well.
As it usually does, life threw yet another curve. Hope found out she was going to be an aunt and it inspired her to finally write the first Adventure of Baby Jaimie book. However, this was no easy feat. Hope was clueless as to where to start, so she just started writing. It took several drafts, but the author final had a solid story, but publishers weren’t interested in it because they thought selling a book with a disabled main character wouldn’t appeal to the masses, Hope thought they were all wrong.
In 2005, she moved back to New York. She just happened to reconnect with a friend from high school through social media, and they got together for lunch. When Hope was asked what she’d been up to the past few years, there certainly was a lot to tell. However, it was the current issue of figuring out how to get this Children’s book published that was the main topic of discussion. The friend happened to know of an author who self-published his own Children’s series. Hope was given his contact info, and she contacted him as soon as she got home. He talked her through the steps of acquiring an illustrator and finding a self-publishing company.
In 2006, Hope released her first Children's book, The Adventures of Baby Jaimie. As they say, the rest is history. Jaimie Hope now has books in multiple genres. They include Children's picture books, Young Adult Romance, New Adult Romance, Paranormal Romance, and Non-fiction.

You have subscribed to alerts for Jaimie Hope.

You have been added to Jaimie Hope's favorite list.

You can also sign-up to receive email notifications whenever Jaimie Hope releases a new book.