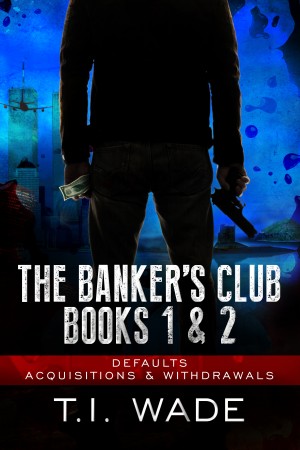 Price: $7.97
$3.19 USD
Buy with coupon Use the code AGB60 at checkout for 60% off during our site-wide promotion!
(Offer good through April 20, 2020 )
Have a better coupon?
Add to cart, then apply your coupon
Add to Library Give as a Gift
How gifting works
Create Widget
Tags: thriller crime money theft banking hackers computer hacking
About T I Wade

T I Wade was born in Bromley, Kent, England in 1954. His father, a banker was promoted with his International Bank to Africa and the young family moved to Africa in 1956.
The author grew up in Southern Rhodesia (now Zimbabwe). Once he had completed his mandatory military commitments, at 23 he left Africa to mature in Europe.
He enjoyed Europe and lived in three countries; England, Germany and Portugal for 15 years. The author learned their way of life, and language before returning to Africa; Cape Town in 1989.

Here the author owned and ran a restaurant, a coffee manufacturing and retail business, flew a Cessna 210 around desolate southern Africa and achieved marriage in 1992.
Due to the upheavals of the political turmoil in South Africa, the Wade family of three moved to the United States in 1996. Park City, Utah was where his writing career began in 1997.

To date T I Wade has written eighteen novels.

Learn more about T I Wade

You have subscribed to alerts for T I Wade.

You have been added to T I Wade's favorite list.

You can also sign-up to receive email notifications whenever T I Wade releases a new book.