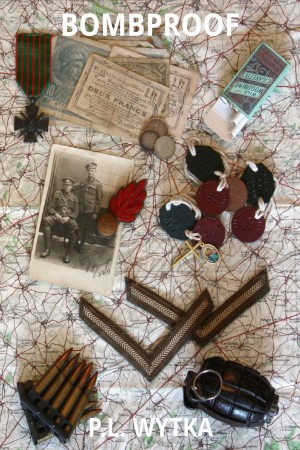 By P. L. Wytka
Rated 5.00/5 based on 2 reviews
One year on the Western Front through the eyes of a First World War Canadian infantry platoon. More
The Great War is two years old and shows no sign of ending soon. The revered “Originals” of the Third Battalion are becoming a rarer breed with each passing day. As new replacements fill the spots of their fallen comrades, they must decide whether to remain with the battalion, or accept a safe “bombproof” job away from their friends, obligations, and identities as Originals of the Third.

BOMBPROOF is a novel in three parts and takes place over one year in 1916-1917. Parallel stories set after the war provide glimpses into the lives of the survivors and how the decisions they made and hardships they endured continue to affect their lives long after they have returned home.
Download: epub mobi (Kindle) pdf more Online Reader
lrf pdb txt
Price: Free! USD
Add to Library
Create Widget
Tags: canada canada military canada historical fiction fiction war
About P. L. Wytka

I was born and raised in Toronto, studied English and History at Trent University, and Education at Queen's. I spent nearly a decade in the Canadian Forces Primary Reserve, finishing my career with The Royal Regiment of Canada as a humble "Coroporal" according to my discharge certificate. I pay my bills slogging it out for a charity. For fun, I collect military antiques, restore furniture, and drink a lot of beer.

About the Series: Third Battalion Trilogy

Four years on the Western Front through the eyes of a First World War Canadian infantry platoon.

Wytka captures the time as only someone deeply knowledgeable and passion ate about Canadian War History can. Would recommend for any current serving military personnel or Canadian history buffs keen to learn about the trials and battles of their dead forefathers. Very much looking forward to the next two in the series.

A superior fictional memoir covering one year of a Canadian battalion in the First World War—the Great War as it was called until a greater one came along. Primarily concerned with the members of one Section (or Squad, as we might now call it) and the "originals"—those who were "bombproof" and managed to come through alive. With many flash-forwards to the later life of one man.

As seemingly realistic as fiction can be, I only noticed one important missing element, the louse patrols and a few other personal problems of men who are unable to be clean in a time when DDT had yet to be invented.

I'm surprised this hasn't made it to a conventional publisher. Heaven knows many a worse book is available from them.

You have subscribed to alerts for P. L. Wytka.

You have been added to P. L. Wytka's favorite list.

You can also sign-up to receive email notifications whenever P. L. Wytka releases a new book.