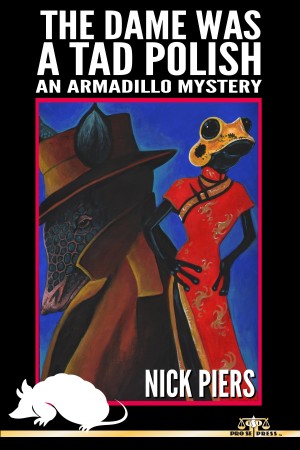 The Dame Was a Tad Polish: An Armadillo Mystery

By Nick C. Piers
Rated 4.00/5 based on 1 reviews
Dilbert Pinkerton—mutant armadillo and private detective—has collared his first murder mystery since moving to Nevermore Bay and it's a doozy: the victim was found impaled on a flag pole thirty stories high. Enter Lily Pad, the star witness in the case, TV actress and mutant frog. Dill must risk everything to keep her safe until the case comes to a head. Or she might lose hers. More
“The name's Dilbert Pinkerton: mutant armadillo, private detective. I dig for the truth.”

The truth was, Dill had collared his first murder mystery since moving to Nevermore Bay and it was a doozy. The victim was found impaled on a flag pole nearly thirty stories high, innards spilling all out in the open like they decided to take a vacation from his body. Although the police called the strangest detective to ever wear a shell and fedora into consult, the powers-that-be weren’t fond of having him around.

Neither was the star witness in the case.

Lily Pad—TV actress and mutant frog—lived across the street from where the body was found, her apartment window lining up in perfect view of the dead guy. Almost like the murderer wanted to make sure Lily saw it when she'd open the curtains in the morning, drinking her morning java.

Being the seasoned hard boiled detective he is, Dill is sure the actress is hiding something, that she is connected closer to this case than she lets on. Worse, anti-homoanthro sentiment is already pretty strong, what with Dill making a splash in the city the way he did. To solve the case, Dill takes every risk to get close to Lily, not only to find a killer, but to keep her safe until all this comes to a head. Before she loses hers.

The follow up to The City of Smoke & Mirrors, The Dame was a Tad Polish by Nick Piers. From Pro Se Productions.

The unknown is intriguing and scary. The unknown: a crime novel whose protagonist is part human, part armadillo. Sounds intriguing, right? Who wouldn't want to learn more about the life and times of a P.I. with a carapace? But it also sounds a little scary. Was the author be able to pull it off? Will he be able to help me suspend disbelief and care about this fantastic creature from his imagination? Or will I end up yawning, shutting down my Nook and swearing off unfamiliar authors?

I'm happy to report that Mr. Piers was able to successfully immerse this reader in an imaginary world where human armadillos work as detectives and frog women are movie stars. We can all empathize with an outsider and Dilbert Pinkerton, the mutant detective, is definitely one of those. Though there's some gratuitous gore and Dilbert is perhaps a bit too hard boiled, this isn't comic strip. This is a novel with hints of despair and enough space for moral ambiguity.

The novel's chief weakness was its villain. To avoid spoiling the mystery, I will only say that the novel would have been more satisfying if its villain had been more fully developed. Despite this shortcoming, I enjoyed The Dame Was a Tad Polish. If, like me, you're considering making this your first Nick C. Piers novel, I encourage you to overcome your fear of the unknown and dive in.

You have subscribed to alerts for Nick C. Piers.

You have been added to Nick C. Piers's favorite list.

You can also sign-up to receive email notifications whenever Nick C. Piers releases a new book.