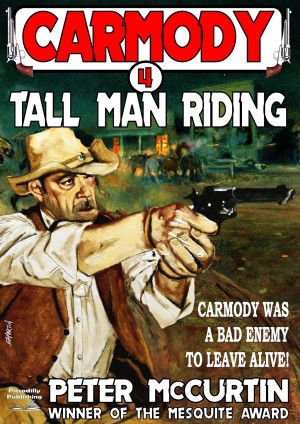 Peter J. McCurtin was born in Ireland on 15 October 1929, and immigrated to America when he was in his early twenties. Records also confirm that, in 1958, McCurtin co-edited the short-lived (one issue) New York Review with William Atkins. By the early 1960s, he was co-owner of a bookstore in Ogunquit, Maine, and often spent his summers there.
McCurtin's first book, Mafioso (1970) was nominated for the prestigious Mystery Writers of America Edgar Award, and filmed in 1973 as The Boss, with Henry Silva. More books in the same vein quickly followed, including Cosa Nostra (1971), Omerta (1972), The Syndicate (1972) and Escape From Devil's Island (1972). 1970 also saw the publication of his first "Carmody" western, Hangtown.
Peter McCurtin died in New York on 27 January 1997. His westerns in particular are distinguished by unusual plots with neatly resolved conclusions, well-drawn secondary characters, regular bursts of action and tight, smooth writing. If you haven't already checked him out, you have quite a treat in store.
McCurtin also wrote under the name of Jack Slade and Gene Curry.

About the Series: Carmody

Carmody is, on the surface at least, just another trail-wise adventurer. Sometimes he is presented as an outlaw, sometimes as a gun-for-hire. Whatever his current occupation, however, Carmody's eye is always on the main chance, as Peter McCurtin's tough, spare narrative frequently makes plain.

You have subscribed to alerts for Peter McCurtin.

You have been added to Peter McCurtin's favorite list.

You can also sign-up to receive email notifications whenever Peter McCurtin releases a new book.