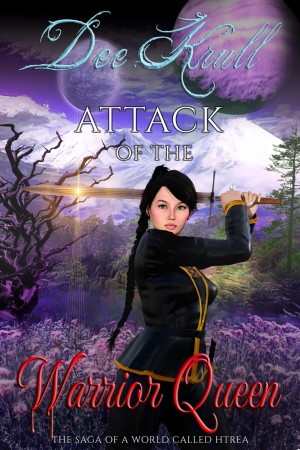 Attack of the Warrior Queen Series: The Saga of a World Called Htrae

Book four finds Laurel and Learden fighting a deadly war with a race of aliens who want to destroy Htrae and its people. To make matters worse a 'dark witch' wants her life and her Guard. In order to stop her she and Learden must separate, leaving them bereft and fighting separately to save their planet. But now a new threat comes on the scene, one that could mean destruction for them all. More
The forth book in the series finds Laurel and Learden waging a deadly war with the aliens who are now using the portals to bring in another alien they call the ‘tall ones’. To make matters worse she finds that her mother’s sister, who was believed to be dead, is alive and well and is a master of dark magick. She would have Laurel as her slave and her army at her command if she could gain the upper hand.
In order to keep her from doing just that she and Learden must separate so the ‘dark witch’ cannot use Learden to gain access to Laurel and her Gard. Apart they are devastated and must focus on eradicating the aliens seperatly. Learden connects with his past and fights the aliens the only way he knows how with his old crew and others with the same goal.
Laurel and Banrion, the beautiful white griffin, and her Guard fight together from the sky while Learden fights on land and finds other ways to communicate with her. But when the aliens gain the upper hand Laurel is captured by a new faction of Elves who eventually become her allies. They help her search for Learden.
Meanwhile Learden is captured and escapes only to discover there is another danger to the planet and it’s daoine (people), one that has been there before and they are more fearsome and evil than even the aliens who are preparing to bring them through the portals.
Summary: Book four begins with Kronus shooting Laurel and Banrion, out of the sky. Banrion escapes, but he captures Laurel, telling her he is taking her to the alien base camp on West Continent. She manages to escape but when Learden and Banrion, take her back to the base camp Mother tells her that her mother’s sister Kala better known as the ‘dark witch’ is trying to find her and the only way she will be safe is if she and Learden break their bond.
Laurel is devastated and tries to hold on to him, but Learden’s love for her convinces her she must; even though it will break both their hearts. Once they have separated she begins to focus on ridding her beloved planet of the aliens once and for all. But her campaign is interrupted by the Goddess’ new choice for her consort; Kronus. When Kronus takes Alela she has no choice but to deal with the ‘dark witch’ who Kronus is working for. She has her family and the threat becomes too dire for her to ignore.
When her war takes on another sinister note keeping her and her female bodyguards away from the guard, they are captured by the King of the Elves and his thousands of Guard, not to mention his son, the prince who is enamored with Laurel and wants to challenge Learden for consort to the queen. Eventually she finds them to be allies and they help her search for Learden while finding a new enemy; prehistoric Vampires who have come to take their planet back and they have a deadly secret that could cost Laurel her life.
Available ebook formats: epub mobi pdf rtf lrf pdb txt html
First 20% Sample: epub mobi (Kindle) lrf more Online Reader
pdb
Price: $3.99 USD
Buy Add to Library Give as a Gift
How gifting works
Create Widget
Tags: fiction romance vampires epic aliens fiction action adventure fiction fantasy fiction fantasy epic aliens adventure aliens and creatures
About Dee Krull

I am a retired clinical hypnotherapist. I completed my Ph.D. in 1990 and started a private practice which lasted twenty-five years in Southern California. I moved to Tucson, Arizona in 2005 with my late husband Chad where I began to explore my creative side in singing acting and writing. I have three children living in Southern California, one who adopted me in Sparks, Nevada and seven grandchildren.

I wrote "Dreams and Vampires" in Arizona. However, when I decided to place the beginning of my story in Arcata, California it rekindled my love of the North West and the peaceful solitude it has to offer. I will soon move to Northern California with my cat Gwynie and Finish writing my second book in the series of "The Saga of a World Called Htrae."

Also in Series: The Saga of a World Called Htrae

Reviews of Attack of the Warrior Queen Series: The Saga of a World Called Htrae by Dee Krull

You have subscribed to Smashwords Alerts new release notifications for Dee Krull.

You have been added to Dee Krull's favorite list.

You can also sign-up to receive email notifications whenever Dee Krull releases a new book.