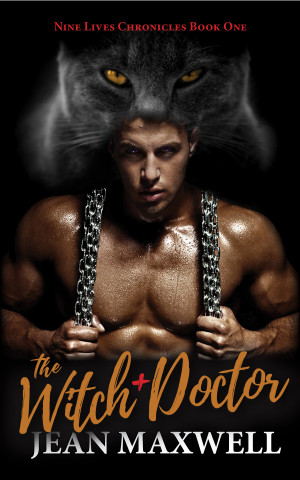 The Doctor is most definitely in...take your sexual medicine with a visit to sexy, brilliant Dr. Valor McCaine, who just happens to be a 200-year-old warlock with a bedside manner to die for! More
Where do witches go when they're feeling a little poorly? To the Witch Doctor, of course. Sexy, brilliant Valor McCaine is a warlock making his way in the modern world as pharmacist by day and witch-healer by night...sometimes day and night! While most of his patients, all women, are cured by Valor's formidable sexual prowess, his race is slowly being decimated by a sinister virus he has been tracking and researching for years. Will a breakthrough ever come? Valor's best chance walks through his pharmacy door one afternoon in the form of young pharmacology student Darcy deHavalend, who is doing secret research
of her own. Will they become partners or adversaries in a race to save witchkind?

Jean Maxwell was born in Edmonton, Alberta, Canada at the tail-end of the baby boomer era, which she says makes her a "late-boomer". It's a lot like her writing, which she didn't start until many decades later. But Jean was always an artist at heart, having practically come out of the womb with pencil in hand and blessed with (as the fictional John Hammond put it) a 'deplorable excess' of creativity. A graphic designer as well as a musician, the muses clearly have had their way with her and aren't done yet. To date, she has 5 published novels to her credit and more than a dozen ghostwritten works. To keep a pulse on the public's literary tastes, she also reviews books for a popular romance review website. She still resides in her home town and enjoys things 'the Canadian way', which means having the outdoors as a best friend, apologizing for no real reason, bemoaning an overtaxed and over-governed society but remaining blissfully unconcerned about politics, religion or gender issues. We think it's the weed.... :)

About the Series: Nine Lives Chronicles

Tales of magic, witchcraft and lust for both love and power, as seen through the feline eyes of a much-loved and long-lived familiar to generations of witches.

You have subscribed to alerts for Jean Maxwell.

You have been added to Jean Maxwell's favorite list.

You can also sign-up to receive email notifications whenever Jean Maxwell releases a new book.