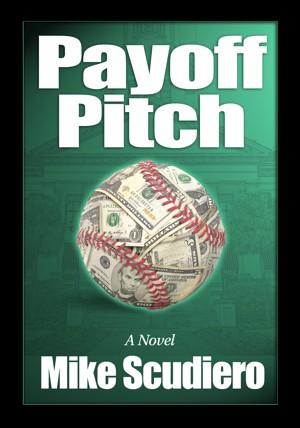 An obnoxious baseball team owner, an influential state governor and a ripped-from-the-headlines cast of ballplayers, politicians and lobbyists twist arms in the Florida Legislature over a controversial taxpayer-funded stadium proposal in downtown Orlando.

"Payoff Pitch" takes an inside look at professional baseball and a behind the scenes view of high-stakes political deal-making. More
After years of futility and playing baseball in a rotting stadium, the Orlando Sunspots and their bloated owner make a final run at persuading the Florida legislature to construct a new taxpayer-funded downtown stadium.

For Charlie Davis, the aging Florida Governor, his legacy is at stake as he tries to keep the Sunspots from relocating with an attractive financing offer, courtesy of Las Vegas leaders.

High-powered politicians, uncontrollable athletes and a sexy cast of lobbyists play for keeps in the Sunshine State - while a franchise and multiple political careers hang in the balance.

What follows is a zany, off-beat tale of political deal-making and hard-knocks baseball that almost seems too life-like to be labeled fiction.

AUTHOR'S NOTE: This story contains explicit language, depictions and narratives some adults will find objectionable. It is intended for mature readers who are not easily offended by the above-referenced content.

A former staff member in the Florida House of Representatives for six years and a media personality beginning at age 16, Mike Scudiero spent most of his spare time in a full calendar year penning a zany novel combining his two favorite passions: baseball and politics. Off-beat, comedic and perhaps just outrageous enough to be true, Payoff Pitch is a must-read for any true political junkie or baseball fan.

A political and media strategist, Mike also negotiates labor contracts as a staff member with the Coastal Florida PBA, where he has worked since 2008.

Mike is a native of Long Island and has lived in central Florida since 1984. He and his wife Dixie have four children. They reside in Ormond Beach.

You have subscribed to alerts for Mike Scudiero.

You have been added to Mike Scudiero's favorite list.

You can also sign-up to receive email notifications whenever Mike Scudiero releases a new book.