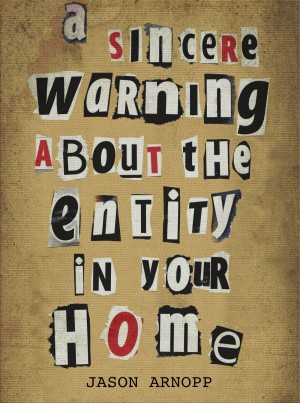 A Sincere Warning About The Entity In Your Home

By Jason Arnopp
Rated 5.00/5 based on 1 reviews
A terrifying ghost story, set in your home. Yes, yours. The previous inhabitant of your home writes you an anonymous letter, to warn you of the ghastly horror which you may already be facing... More
"Dear friend,

This is no chain letter, hoax or prank.

It is a sincere warning about your home and the entity which dwells within.

Your home has been haunted for quite some time..."

A NEW CONCEPT IN FEAR...

Imagine a supernatural horror story in which the paranormal activity happens within YOUR home.

As you read the story, it is your own home you'll be imagining.

The 10,000-word short story A SINCERE WARNING ABOUT THE ENTITY IN YOUR HOME is presented as an anonymous letter to YOU, which has been sent to your address. It details the terrifying events which happened in your home and which continue to this day.

You have inherited a curse and are being preyed upon by a terrifying apparition. This letter from the previous resident advises you how to cope, while detailing the unthinkable ordeal they suffered before you.

A SINCERE WARNING ABOUT THE ENTITY IN YOUR HOME is the ultimate way to scare yourself at home, because it's the only ghost story which takes place IN your home. Dare you read it?

"This book ruined my night and got me out of bed an hour early. Powerful stuff indeed! Jason Arnopp owes me sleep!" – Michael Thompson, reader

"Superb stuff, little hooks and phrases keep popping into my forebrain at 3am to make me anxious. Brilliant read, and a steal at this price" – 'Skippa', Amazon UK reviewer

"The creepiest thing I have read in an age. I read half of it and woke up gasping for breath!" – reader Stuart Lemon, Oxfordshire, UK

Jason Arnopp is the writer of acclaimed horror novella BEAST IN THE BASEMENT, Lionsgate US supernatural horror movie STORMHOUSE and official fiction for the worlds of DOCTOR WHO, SARAH JANE ADVENTURES and FRIDAY THE 13TH. He lives in Brighton, UK.

Jason Arnopp is a novelist, scriptwriter and sometime journalist. He has contributed fiction to the worlds of Doctor Who, The Sarah Jane Adventures and Friday The 13th. His most recent release is the Orbit Books novel The Last Days Of Jack Sparks, which is now in movie development at Ron Howard's Imagine Entertainment.

Arnopp wrote the 2011 Lionsgate US horror feature Stormhouse and script-edited the 2012 Peter Mullan film The Man Inside. He is also the author of books including Beast In The Basement, A Sincere Warning About The Entity In Your Home, Auto Rewind and How To Interview Doctor Who, Ozzy Osbourne And Everyone Else. He lives in Brighton, UK, with a stupidly large collection of old-school VHS.

Chilling, expertly written and engrossing. The author's masterful use of second person (in the form of a letter to the reader) draws the reader into the story. A unique horror experience.

You have subscribed to alerts for Jason Arnopp.

You have been added to Jason Arnopp's favorite list.

You can also sign-up to receive email notifications whenever Jason Arnopp releases a new book.