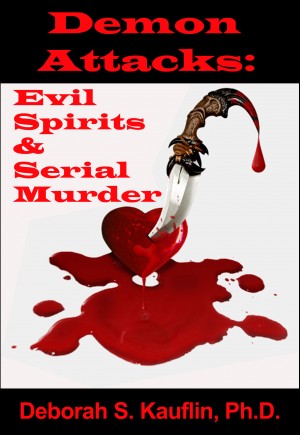 After interviewing 25 multiple murderers for criminal profiling research, Dr. Kauflin found a disturbing link between these killers and dark paranormal activity. Based on the interviews with both killers and witnesses, she pieced together an eerie puzzle which shows that evil spirits really do interact with serial killers. Just who or what is stalking victims with these murderers?

Dr. Kauflin worked on hundreds of serial murder & sexual homicide cases for police departments. She taught thousands of homicide detectives, FBI agents, US Military, and created the profiles of female serial killers, sadistic murderers, and terrorists. Back in November 2008, Dr. Kauflin predicted that India would be the next big terror attack in her book Disturbed. Two weeks later, terrorists hit Mumbai and took 166 lives. Her most famous profile was of the BTK serial murderer, and she is known for being the first person to interview a group of female serial killers for groundbreaking criminal profiling research. Dr. Kauflin has appeared as a criminal profiling expert on ABC, CNN, FoxNews, The Discovery Channel, Investigation Discovery, and the Seoul Broadcasting System. She wrote for Psychology Today Magazine online, did volunteer work for the National Organization of Parents of Murdered Children, and has authored four other books.

As a seasoned paranormal investigator it takes a lot to unnerve me but this book did it. Anyone that investigates the paranormal or has an interest in serial killers must read this. I read this book in a matter of hours because I refused to put it down. Deborah has documented the evil entities that haunt the life of developing serial killers from childhood to adulthood. The book contains her interviews of incarcerated serial killers in detail and each killer's unexpected encounter with the paranormal. Be warned - This is the type of book you continue to think about long after you finish the last page.

You have subscribed to alerts for Deborah S. Kauflin.

You have been added to Deborah S. Kauflin's favorite list.

You can also sign-up to receive email notifications whenever Deborah S. Kauflin releases a new book.