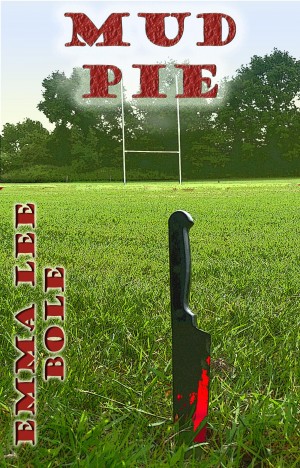 Emma Lee Bole is a pseudonym.
I lived in Leeds, Liverpool, Manchester, Sheffield, Nottingham and Australia before settling in north-west England, where I write magazine short stories and children's books under other names.

The two stars are for the great start. I was happily reading until she started conversing with a dead woman! The blurb and tags give no indication of this which happens often and upsets me. It's easy to not read a book and not easy to stop reading one you are enjoying but suddenly gets creepy.

This book is set in England, near Manchester, and features a young cook, Lannie Herron, being chased by an evil bunch of young thugs. They want to kill her for exposing their drug dealing. She is fleeing in hopes of escaping their retribution.

(Mud Pie, by the way, is a dessert, although I can’t really describe it since I’ve never had it. But needless to say, Lannie makes a great one.)

So there she is working in some small pub, praying to escape detection and death. Who said survival was easy?

The e-book is an engaging read full of rugby players, flirtations, and narrow escapes. I truly enjoyed it, and since it ended with her future not fully spelled out, I suggest Dole use this as the first book in a series of Lannie adventures. I’d certainly read them for whatever that’s worth.

The previous review tells all you need of the premise and plot so I'll merely add some praise. The pseudonymous Miss Bole can not only write but plot, something she proved with Widowmere.

I've a few complaints: she hates to round off her tales with a happy ending, and she rather likes the sound of her own voice. I presume so, at least, because both books run on a bit. OTOH she manages to create a sense of peril and nicely brings off the well-regarded surprise ending.

In Widowmere she educated readers about painting—particularly watercoloring—and touring the English Lake District. In Mud Pie we are educated about chefery (commercial cooking, in plain American) and Rugby football.

In addition, from reading between the lines of this book, a hint for those who plan to tour England. Avoid Manchester.

Mud Pie is a British mystery. I've read many British stories in the past and have grown accustomed to the most common slang terms used. But Mudpie brought slang words to a whole new level. It was interesting, but it necessitated using the dictionary quite often.
The plot is full of pain and despair; the main character has been condemned to death by gangsters. At times Lannie is so distraught she converses with the dead owner of the house she lives in and then with a murdered bar maid.

Lannie Herron is a twenty-seven year old pastry chef who gets crossways with the Manchester, England, criminal mob. After several attempts to kill her fail, she leaves Manchester to hide out. At about one third into the book we learn the full story of why she has been marked for brutal death.
Lannie's new life in hiding centers around a rural rugby club and the country pub where she cooks. Her new bevy of characters soon begin to open up to her and she learns all have something to hide, and not all are the friends they purport to be in public.
There is conflict and suspense galore. The mobsters are still after Lannie, and a murder at the rugby club elevates Lannie to the head of the suspects list. But then she compiles her own list of suspects with reason to commit the murder and slowly includes most of her new group of acquaintances.

By halfway through Mudpie, I was intrigued and knew I had to finish.

The writing quality is above average with only infrequent editing errors. A few scenes were lumped together without breaks, and I felt a few sentence structures were clumsy. But these were few and minor and barely distracted from the overall quality of this engrossing story.

This is an unsolicited review of a free book.
Vigilant Reader Book Reviews.

You have subscribed to alerts for Emma Lee Bole.

You have been added to Emma Lee Bole's favorite list.

You can also sign-up to receive email notifications whenever Emma Lee Bole releases a new book.