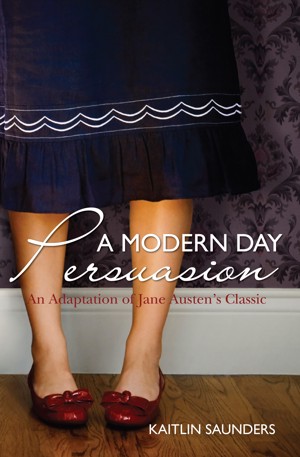 By Kaitlin Saunders
An Austen adaptation of Jane's classic "Persuasion", "A Modern Day Persuasion" is the story of a young woman who loses her fiancé after being swayed by her family to wait. Now older, her former beau is back just as she has found another—who now is the better man? More
Nearly eight years ago, Anne’s family, specifically her father, convinced her that she was too young to wed and insinuated that her fiancé Rick was solely interested in her wealth and status. Against her better judgment, Anne agreed to postpone the marriage, only to watch the love of her life walk away, never to be heard from again. Almost a decade later, still single and no longer wealthy, Anne struggles to make a name for herself designing greeting cards. Unable to move on with her life, she finds herself still emotionally bound to the man who disappeared the moment things didn’t go his way. Through a series of serendipitous events, however, Anne is reunited with her old love—just as a new beau enters the scene. Only time will tell if her heart can finally be set free to love again, or if Rick’s initial betrayal will leave her single…forever.

“Full of charm, wit, and intelligence, Kaitlin Saunders’ re-imagining of Jane Austen’s posthumous classic Persuasion is nothing short of magical. Superb in its straightforward plotting and wonderfully paced, Saunders’ strengths in adapting and updating this delightful tale are the hallmarks of Austen herself, deepening the pleasure of the experience. Focusing on the universal and putting its characterizations front and center, this modern update succeeds where many fail, relying on the underlying material to serve as a foundation to take an old classic and make it new. And though capturing the aesthetic of a modern romantic comedy while retaining the depth of Austen’s turn-of-the-century social commentary is no small feat, A Modern Day Persuasion accomplishes this task with ease and aplomb, consistently delivering laughs while forever staying loyal to the themes and situations that made it such a rich story over one hundred years ago.”
Available ebook formats: epub mobi pdf rtf lrf pdb txt html
Price: $2.99 USD
Buy Add to Library Give as a Gift
How gifting works
Create Widget
Tags: persuasion jane austen austen austen variation modern jane austen adaptation anne elliot frederick wentworth wentworth kaitlin saunders a modern day persuasion
About Kaitlin Saunders

Kaitlin Saunders is proficient on the works of Jane Austen and finds that literature written by Austen serves to give her inspiration. At age sixteen, Saunders began her literary career writing her first screenplay, titled "Caroline," later bringing this period piece to life. She directed and produced this film, which gained popularity after being aired on local television. Her first novel, A Modern Day Persuasion, was published in 2011. Saunders and her husband enjoy cuddling up with their children and watching BBC as a family.

You have subscribed to alerts for Kaitlin Saunders.

You have been added to Kaitlin Saunders's favorite list.

You can also sign-up to receive email notifications whenever Kaitlin Saunders releases a new book.