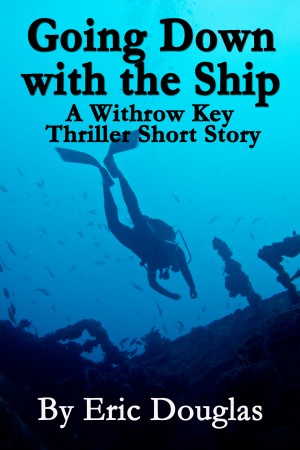 Going Down With the Ship

Life is an adventure for Eric Douglas, above and below the water and wherever in the world he ends up. Eric received a degree in Journalism from Marshall University. After working in local newspapers, honing his skills as a story teller, and following a stint as a freelance journalist in the former Soviet Union, he became a dive instructor. The ocean and diving have factored into all of his fiction works since then.
As a documentarian, Eric has worked in Russia, Honduras and most recently in his home state of West Virginia, featuring the oral histories of West Virginia war veterans in the documentary West Virginia Voices of War and the companion book Common Valor.
Visit his website at: www.booksbyeric.com.
Eric talks about adventure and taking time to be creative, along with diving and writing, on his blog at www.booksbyeric.com. He would love it if you dropped by to say hello.
You can also follow him on Twitter, get in touch on Facebook or through Google+. Lastly, you can always send him an email: eric@booksbyeric.com

Set on a bypassed key in the Florida Keys, life moves a little slower and a little weirder on Withrow Key. Each Withrow Key thriller features scuba diving, adventure, boats, the ocean and mystery along with beautiful locations and scenery.

Reviews of Going Down With the Ship by Eric Douglas

You have subscribed to Smashwords Alerts new release notifications for Eric Douglas.

You have been added to Eric Douglas's favorite list.

You can also sign-up to receive email notifications whenever Eric Douglas releases a new book.