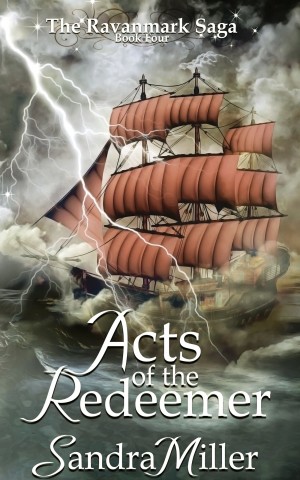 Acts of the Redeemer

But how can Alannys defend herself against a menace she can’t even see?

As the movement to ‘take the power of the few to the many’ continues to grow, and opposition to her swells stronger than ever, Alannys turns to the one thing that can prove her beyond a doubt—or destroy her beyond any recovery—the Acts of the Redeemer. But before she can perform them, she has to cross Ravanmark and the sea to reach Mount Mouseion..and it looks like the journey itself might kill her.

Join Alannys and her friends again as they embark on a journey by land and by sea, risking everything to travel to the one place where they might be able to save Ravanmark--and themselves.

Sandra Miller is an author. She's that girl you knew in school who always had a notebook in one hand and a pen in the other, and spent every spare second experimenting with ways to put them together.

Her poetry has appeared at Storyhouse, and one of her poems won the Grand Prize in the FictionAddiction 2002 poetry contest.

Her non-fiction articles have appeared in Writer's Journal, Music for the Love of It, Antiques & Collecting Magazine, Writing World, Vision for Writers, and Writer's Forum, a Writer's Digest publication.

She can be found on the web at www.sandra-miller.com

Also in Series: The Ravanmark Saga

You have subscribed to alerts for Sandra Miller.

You have been added to Sandra Miller's favorite list.

You can also sign-up to receive email notifications whenever Sandra Miller releases a new book.