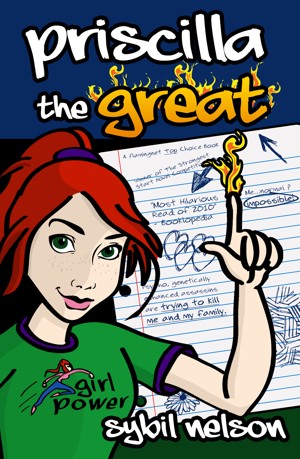 Add an older brother annoyingly obsessed with Christina Aguilera, mischievous baby twin brothers who could scare the sin off of Satan, and parents more puzzling than a Rubik’s cube in the Bermuda triangle and expect a smoking page-turner!

Sybil Nelson lives in Charleston, South Carolina with her husband and two children. She currently attends the Medical University where she’s earning her PhD in Biostatistics. 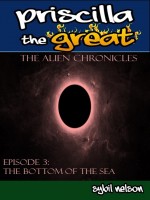 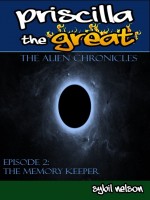 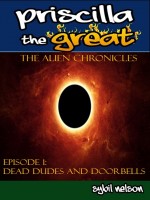 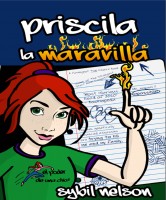 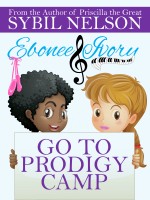 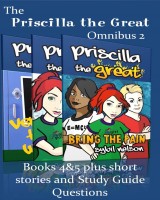 If Nancy Drew had a child one of the X-Men, you'd have someone almost as awesome as Priscilla the Great. This story is written for preteens through young adults, but it's an excellent read for all ages. As far as why I chose to read it instead of one of my normal fantasy books, well . . . slight confession: I've read all the Nancy Drew series, most of the Hardy Boys, all the Tom Swift, all the Cherry Ames . . . and lots of other books geared to young adult. It's what I read before someone introduced me to my first Xanth book at the age of 14. I've actually had this one in my Kindle for over a year now (along with a bazillion other books, or however many the Kindle holds)

I really, really, really enjoyed this book. Priscilla is a likable character who goes through the standard frustrations of a 12 year old, but also has a few twists thrown in. She's not without her personality flaws, but they're realistic and the reader can totally sympathize with them. She's got a brothers that make her life difficult, as brothers are supposed to do, and an overprotective father. Her mother is always absent, which upsets Priscilla more than perhaps anything. A couple of boys and a best friend complicate matters, as they should. That's their job after all.

Then information about the Selliwood Institute starts to appear. I can't tell you too much without giving spoilers. Mix in shady experiments, children, government plots and you get a story that's filled with adventure, danger and mystery. There's no end to the suspense. I started reading and didn't stop until I had finished the story a few hours later.

The only negative I found was that certain things stretch believability a little bit, but it wasn't enough to detract from the story, and it might not be a problem for it's target audience, which is probably people under the age of 40. *chuckling*

I highly recommend this book for preteens on up. It's a great story with characters that the reader can relate to. I've already purchased the next in the series and will be getting more as I finish each one. Oh yeah, there's about 8 or so of them, so it's plenty to keep a reader interested.

This is a fun middle grade read. The premise is creative, and Priss is a strong character with an authentic voice. The cliffhanger at the end is a good twist leading into the next book.

These books are absolutely wonderful. The heroine, Priscilla is spunky, spirited, and completely what you'd expect a 12 year old super girl to be. The message of 'girl power' in these books is one thing that I really loved. This is a series that every young girl should read from ages 9 and up. While I was reading I'd give my own daughter an idea of what the books were about and now she's dying to get her hands on them. I feel that Sybil Nelson has definitely found her niche in the writing world and these books are destined to become huge! I can't wait for more in the series!

The story is one that catches you in its grasp and doesn't let go, if you read only one middle-grade series this year you must make it "Priscilla the Great"! Be sure to check out the website for Priscilla as well at: http://www.priscillathegreat.com/

A fantastic novel that will be sure to please teens and adults alike! I especially enjoyed the main character's humorous musings. Looking forward to see what happens in the next book!

What an engaging main character! Pricilla isn’t like a normal tweenage girl. She has special powers. What kid wouldn’t want super powers? Well, they contribute to mishaps and dangers, but the unique situations keep the reader glued.

Pricilla’s friends and family develop nicely throughout this story. The author did a fine job of introducing each one. I feel I know them, and I care about their outcomes. I’m especially drawn to her best friend Tai. She’s a brainiac girl who can easily relate to Pricilla’s idiosyncrasies. I also liked Pricilla’s twin little brothers. They are mischievous little demons who are annoying, yet fun and entertaining.

This is a fast read, filled with adventure. It dipped me back into my middle school years when imagination, coming of age, and first loves are at their peak. I’m not crazy about cliff-hanger endings (the only reason I rated a 5 rather than a 4), but thankfully I have book #2 to delve into without delay.

We are introduced to Priscilla (Priss) M. Sumner as she is gearing down her summer vacation and preparing to start grade 7. Our darling heroine is only a whopping 12 years old when this novel begins (13 when it ends). She's also going through the onset of puberty, ya know with the "lady's days" and all! The changes within her body aren't just those of a normal pre-teen, she's also got a wicked case of the hot flashes, complete with flammable fingertips! You see Miss Priss isn't just a normal kid, she's also a mutant.

Then again not just any mutant, she's a second generation (and she didn't even know!) mutant. This is all a surprise as she was not aware of her mother's special abilities and how they got passed along to her, at least some. Priss is quite unique in some of her talents, things her mother cannot do. What kid doesn't love being able to do something cooler and better than their parents?

Priss' story has the usual pre-teen drama with her crush liking her BFF and her guy friend liking her and she's not quite feeling the same (at least not then, wink wink nudge nudge). Also the typical over-protective father (okay not really "typical") who wants her to be safe and the "my mother doesn't understand me" schtick that every girl goes through. Throw in a government conspiracy with super-duper mutant assassins and you've got a great read.

It was great that the author, Sybil Nelson, allowed Priscilla the role of not only budding mutant, but a wickedly cool super hero. She saves the day and saves the lives of other experimental mutants that her oft-absent mother was trying to save too. The best part of her heroics is that they were done in the a 12 year old mentality. Nothing that she did or said would have been out of character for someone of that age (okay maybe the fingertip fire), and her solutions to the situations she faced were genius and right up the alley of a 12 year old girl.

I loved the story. It was written for the age group that Priss is but as an adult I found much humor in her body changes and the love triangles that were connected. It was fun and interesting and a new spin on the whole created vs. natural super hero (our Priss is a comic book lovin' freak too!). For any pre teen I think it would be a perfect read to exaggerate the body changes during puberty and make it easy for them to accept their changes, considering the crazy side affects of Priss' (if she kisses a boy she might light him on fire!).

Priscilla is a typical teenage girl, except for the small thing of being able to shoot fire from her fingers. When Priscilla discovers she has superpowers no one is more surprised than her. This is a fantastic story of the adventures of a teenaged supergirl and her family. I enjoyed each and every page...a must read in my opinion!

(reviewed 2 days after purchase)
rhonda laney reviewed on May 13, 2011

Priscilla is a 12 year old girl her best friend Tai lives across the street. She has fighting with her mom for the past 3 years after she missed her 10th birthday party because of work. She is gone quite a bit. Priscilla is at a party which she talks to a guy she has a crush on and gets hot. she ends up lighting a towel on fire with her hands. Thats her first hint that something weird is happening to her. Her Father is over protective. So she realizes it has to do with her hormones that she developed powers. Her older brother is josh who helps her when she needs it. and 5 yr. old twin brothers. Its a cute book and a fast read. I won the sequale of this book in exchange of a review and sent me the first one to read. I am looking forward too the second book. I did not want the first to end especially how it ended so I will read the second tonight.

You have subscribed to alerts for Sybil Nelson.

You have been added to Sybil Nelson's favorite list.

You can also sign-up to receive email notifications whenever Sybil Nelson releases a new book.