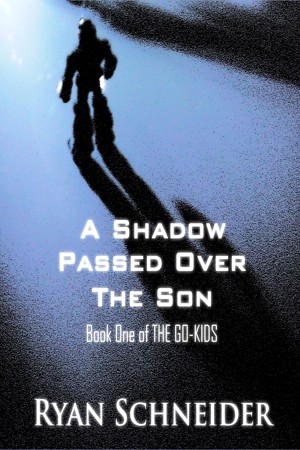 A Shadow Passed Over the Son

A Shadow Passed Over the Son is the first installment of the adult-friendly epic adventure serial series The Go-Kids, quality science fiction from award-winning writer Ryan Schneider. More
An Amazon Top 100 Seller

A Shadow Passed Over the Son is the first installment of the adult-friendly epic adventure serial series The Go-Kids, quality science fiction from award-winning writer Ryan Schneider.

Thirteen-year-old Parker Perkins lives in Manhattan with his mom and dad. Today is Parker's 10th birthday. But Parker's birthday takes a sudden turn and his life will never be the same.

I write fiction. I will make you think and feel. That is my job.

I am a husband, aspiring father, writer, and novelist.

I try to write stories I would enjoy reading.

My work is sometimes dark and heavy, sometimes light and fun, even romantic.

I co-authored "The Pillow Book" with Petal Darker.

I earned a Bachelor's degree in English Literature from the University of the Pacific. I have worked as a newspaper staff writer, a film critic, as well as co-host of a radio show. I studied screenwriting and independent producing at UCLA.

I have written 7 novels, many short stories, a dozen screenplays, and many essays. I also co-produced a 35mm short film.

I am also a commercially-licensed pilot with multi-engine and instrument ratings. I have flown various aircraft: Cessna 152, Cessna 172, Piper Arrow and Piper Seminole.

I live with my wife Taliya in Palm Springs. Taliya is a singer/songwriter and musician. Her music has been likened to Enya, Yanni, and Sarah McLachlan. Taliya plays guitar, piano, and flute. She was awarded a Guinness World Record for recording her original song "Flower Child" in 15 languages. She has toured much of Europe and the United States. She has written and produced two albums and is currently in the studio at work on her third album.

In 2013 I published the science fiction romantic novel EYE CANDY. Read it. You'll like it.

I also published THE DEMON DRIVERS TRILOGY BOOK 1 -- THE BEGINNING. It's all five books of The Go-Kids adventure series collected in one volume for the first time ever! Read it. You'll like it.

I am presently working on Book 2 of THE DEMON DRIVERS (coincides with book 6 of TGK), the epic tale of a thirteen-year-old boy named Parker who has the weight of the world on his shoulders, and the lives of his friends in his hands.

What starts off as an innocent enough scene where Parker innocently decides to skip school on his birthday ends up as a life changing experience as a bomb attack leaves him buried alive and many people dead – his mother included. Three years later, Parker is learning trying to recover from his loss and the country seems to have fallen into hard times, the threat of war ever present. Whilst the country appears to be in control and recovering from what is known as The Attack, the city has imposed seemingly totalitarian authority as a way of maintaining the order – even going so far as to shoot someone for stealing.

The book has a lot of parallels with 9/11 and the fear that resulted after that, forcing most of the world to impose much stronger rules for the purpose of “security”. And this is the feeling we get with the world this story is set in – war has devastated them and they’ve had to create harsher laws in order to impose the social status. I do like the fact that the full details of the way are not revealed straight away and therefore we don’t find the whole story straight away. There isn’t a long winded prologue to explain the reason of the war like many sci-fi stories and this allows us to slowly put the pieces together.

The main focus of the story is Parker, a young boy whose life has been turned around by The Attacks. The story is told practically from his view and we really see how disillusioned he is with the world. His only solace comes from his friends and also playing battle armour simulators, popularised by the character Colby Max. Colby is an actor that is famous for a TV series whereby he plays a super pilot that is loved by all, endorsing all manner of products and merchandise and is pretty much a cultural icon – offering some manner of hope to the public.

At the heart of it, A Shadow Passed Over The Son is a story about friendship and the hardships of war. It’s a fairly chilling tale in places and one that really invokes emotion in the reader. There is a lot of symbolism within the story that really accentuates this perfectly.

My only major gripe would be the pacing of the story. It is a very slow moving story and it takes a while to get going. And when it does pick up, it ends abruptly, which I found rather jarring. I would have preferred it if it picked up pace a lot sooner. That being said, the ending did make me want to read more so in that sense it’s a good ending.

Overall, A Shadow Passed Over The Son is more than your usual “teen reads”. It has a lot of real human emotion to it and really shows how devastating the effects of war can be on society. It’s slow moving, but a good read that can be done in one sitting if you have an hour to use.

You have subscribed to alerts for Ryan Schneider.

You have been added to Ryan Schneider's favorite list.

You can also sign-up to receive email notifications whenever Ryan Schneider releases a new book.