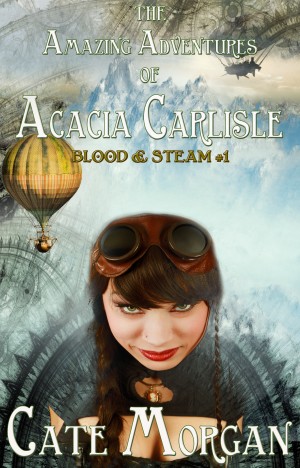 The Amazing Adventures of Acacia Carlisle

By Cate Morgan
Rated 3.50/5 based on 2 reviews
First, Acacia's brother goes missing. Then, her father's airship goes down in the search. And she knows exactly who's responsible: the Baron Bloody Lindsey. Now she's hunting him--and she's loaded for kraken. More
He took her family. She'll fly to the ends of the Earth to get them back.

First, Acacia's brother goes missing. Then, her father's airship goes down in the search. And she knows exactly who's responsible: the Baron Bloody Lindsey. Now she's hunting him--and she's loaded for kraken.

When the head-strong daughter of Captain Drew McCallan's former employer comes knocking on his ship hull looking to settle a score, he figures his luck is finally about to change.

Cate Morgan hails from a long line of Irish storytellers and musicians, so it came as no surprise to her mother when she taught herself to read from the back of cereal boxes at the ripe age of three. Now she’s fulfilling her familial obligations by foisting her stories on an unsuspecting public, subsisting almost entirely on coffee and M&Ms.

She resides in Florida with her long-suffering, supportive husband, gators in the backyard, and two resident Ninja Katz underfoot.

About the Series: Blood & Steam

On the night of her birthday, Acacia’s father and brother return home with a suggestion of Acacia joining their ship for an expedition to Africa, but the trip is cut short before it even starts as Acacia’s brother Archie runs off with the rich Baron Lindsey instead. Her father goes off in search of Archie, but his ship is destroyed in a storm, leaving the family fortune to Acacia. She renews an acquaintance with her father’s dashing new captain and joins the ship to try to track down her brother once again and the dastardly Baron Lindsey.

Being a fan of the Steampunk genre, I had to pick this up, and yes, it does have a lot of Steampunk tropes. From headstrong female engineers, inventors, and adventurers, to airships, and sky cities, and plenty of goggles. Not to mention a Kraken or two. And, yes, it has the usual steampunk Victorian backdrop. The story has a strong heroine (who doesn’t need a black leather bodysuit to emphasize just how strong of a character she is) who also has a delightful introverted side that likes math and figures and doing business. The newly hired ship, while feeling realistically brought to life, did feel like it was drawing on Firefly/Serenity in places, especially when we were introduced to the crew. Most of them were original, but Ash, the sunny female engineer we first see hanging out in front of the ship sitting in a deck chair (that was how Kaylee first appeared in Firefly, too), and there’s the mysterious quarter-master named Dr. Simon with slicked black hair, blue eyes, loves wearing waistcoat vests, and harboring a dark secret (That’s an accurate description of Simon from Firefly. I’m just waiting for his sister River to make an appearance, and be the explanation of the missing supplies). Though those two rather borrowed characters aside, the story still has plenty of original characters (though I suppose Captain Drew with his serious side and cowboy attitude is akin Captain Mal Reynolds, but it’s more of a passing similarity) and the plot was certainly entirely original and a fun adventure to many imaginative locals. At only 96 pages it is a fast read. I would welcome the chance at reading more of Acacia’s adventures where she’s perfectly at ease to put aside Victorian manners for wholesome high-flying action and some romance.

When I picked this 30,000 word novella up, I read the first three chapters in one sitting, and it wasn’t bad. The title character is the stereotypical steampunk heroine; smart, witty, strong-willed, and of course, wealthy. Her anticipation of exploring Africa with her father is infectious, and the dynamics of the Carlisle family is charming. When I put the book down, I was interested in picking it up again when I next had time to read.

The next day, when I picked the book back up, I felt like I had mistakenly picked up another book. Between chapters, the plot had advanced several months. Acacia Carlisle was suddenly more hardened, more cynical, and not wholly like the character I had met the previous night. Though I do expect a character to change over the course of a book, this sudden change felt like a jolt. She had good reason for the change in character, but I feel it would have been a more powerful experience to witness the transition myself so that I could better connect with Acacia.

Connecting with Acacia and the other characters is something I had difficulty with. Though I like a strong female character, I also like characters with depth. Acacia has no real flaws to add any complexity to her character. She’s good at everything, especially maths. She always gets what she wants. She never has to sacrifice anything of consequence. She never has to compromise. Though this all makes for a virtuous character, I found her to be a bit flat. Likewise, the other characters also felt a bit flat to me as well because I rarely saw them react emotionally to anything. I was told by the narrator that they felt this way or they felt that way, but I rarely got to see their feelings reflected in their actions or their decisions.

Another thing that added to the disjointed feeling of the book was a shift in point-of-view. The first three chapters were all straight third person point-of-view from Acacia’s perspective. Starting in chapter 4, the point-of-view shifts around to various characters, including one scene in which a minion divulges the entirety of the villain’s plans. It is the only scene in which this particular character has point-of-view, and it is a monologue of a couple pages right in the middle of the book and serves to clear all mystery and surprise out of the plot. After this scene, I found myself just waiting for the end, since I had been told what was going to happen.

Aside from a character giving away the entire plot in the middle of the book, the plot is consistent. Acacia is trying to recover her brother, who left in partnership with the villain. The plot is adequately resolved in the ending, but it’s never really clear to me what the consequences are. Again, the brother left under his volition. He chose this. And though Acacia apparently is after him in order to preserve Carlisle family unity, it is never clear to me what this means to her, why it is so important to her, and what she stands to lose both internally and externally if she fails. I don’t know what the risk or consequence of failure is, and so it is difficult for me to invest myself in the plot.

The ending is oddly sudden, and yet drawn out. The climax feels rushed because it happens all at once without much build-up or tension. Boom. It just happens. But as soon as the villain is defeated, a second action must be taken to try and rescue her brother, which ends up feeling tacked-on and extraneous.

Kudos to the author for wrapping up the plot line without the cliffhanger I feared was coming. The plot is wrapped up nicely and succinctly and left me feeling satisfied with the resolution while it introduces a new and appropriate dramatic question that invites the reader to the second book in the series. Though there was some violence, it was never graphic, and it was so over-the-top as to almost be comical in places. I also appreciated the nods to the more scientific end of the steampunk spectrum.

All-in-all, this could be a good story told in a style reminiscent of Gail Carriger, and I would like it to be a good story, but it severely lacks polish. It feels unfinished, in that it needs the attention of a good editor. The characters could have more depth. The story line could use some development and fleshing out. The climax could be streamlined. Extraneous exposition could be cut. Unnecessary characters could be removed. And a copyeditor could certainly help with the numerous text errors such as missing words, missing punctuation, and repeated phrases.

You have subscribed to alerts for Cate Morgan.

You have been added to Cate Morgan's favorite list.

You can also sign-up to receive email notifications whenever Cate Morgan releases a new book.