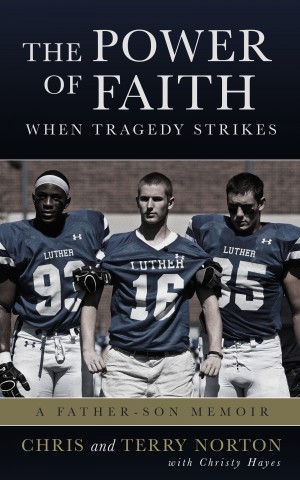 The Power of Faith When Tragedy Strikes

By Chris Norton
& Christy Hayes
Rated 5.00/5 based on 1 reviews
Told through alternating chapters, this inspiring father-son memoir recounts a young man’s seemingly insurmountable quest to regain movement in every part of his body, and a father’s struggle to be the rock his son and family lean on in the face of their worst nightmare. Chris Norton was given a 3 percent chance of ever moving anything below the neck... More
On a beautiful October day in 2010, eighteen-year-old Chris Norton jogged onto the football field on a kickoff for Luther College and was wheeled off on a stretcher after a routine tackle fractured his spine causing significant damage to his spinal cord. Given a 3 percent chance of ever moving anything below the neck, Chris awoke from surgery sixteen hours later defying the odds by shrugging his shoulder, beginning his long-fought journey to recovery with his family and biggest fan—father Terry—by his side.

Told through alternating chapters, this inspiring father-son memoir recounts a young man’s seemingly insurmountable quest to regain movement in every part of his body, and a father’s struggle to be the rock his son and family lean on in the face of their worst nightmare. Chris and Terry depict with brutal honesty the harrowing months they spent in rehabilitation and the years that followed where family, friends, and faith became the nucleus that saw them through. Chris’s graduation walk, marriage proposal, and courageous story have already inspired millions worldwide.
Co-Authors: Chris Norton & Terry Norton
Compiled by: Christy Hayes

Chris A. Norton was born on March 20, 1992, in Des Moines, Iowa. The day he was born his parents joked that the acronym for his name was C.A.N. This is appropriate because Chris CAN do anything he puts his mind to accomplish. Graduating from Bondurant-Farrar High School, he earned a 3.86 cumulative GPA, top 15% in his class, and was a member of the National Honor Society. Chris excelled in athletics participating in football, basketball, and track. He decided to attend and play football at Luther College.

On October 16, 2010, in Decorah, Iowa, playing for Luther College Chris Norton was severely injured while making a tackle on a kickoff, fracturing his C3-C4 vertebrae. After being told from doctors he had a 3% chance of ever regaining movement below the neck, Chris has defied the odds every step of the way, demonstrating a faith and determination to overcome his circumstance that has inspired millions.

The day after his injury, Chris awoke from surgery without any movement below his neck. He spent the following year in Rochester, MN, devoting his time to intense, daily therapy sessions. Throughout his stay he met others with spinal cord injuries and neurological muscular disorders who were fighting the same kind of daily battle to regain mobility. The impact these remarkable individuals had on Chris stuck with him, so that when he returned to Luther College the next fall he felt inspired to launch the SCI CAN Foundation, with the mission of providing opportunities to individuals in need of a path to recovery.

Chris began his speaking career in college by sharing his story and message to various local groups. From there, the word spread about Chris's powerful presentation and he began to get more speaking referrals and requests. He quickly witnessed the impact his message was having with students, families, health professionals, and business employees; he then felt inspired to make a career out of helping others through his words.

Today, Chris continues on his way to recovery by working out 4 hours a day and his speaking career and the SCI CAN Foundation has flourished. Most recently Chris was able to stand unassisted for 10 minutes and he realized his goal of walking across the stage on graduation day. He devoted the final semester of college leading up to his commencement ceremony to a full-time therapy program in Plymouth, Michigan. However, Chris's journey is far from over. Throughout his life Chris has never lost sight of the idea that with hard work and determination anything is possible. Norton Motivation has expanded on this philosophy so that others are inspired to overcome adversity as Chris has — one step at a time.

I think the word inspiration now has a new definition. This book is one of the most powerful I have ever had the pleasure to read. The story of how A singular moment in time changed the lives of not just the football player who was struck down but his family, friends, acquaintances, doctors, nurses, the physical therapy assistants, other victims of this injury and all their circles…it is beyond awe inspiring. I think the thing that struck me the most is how Chris states if he could go back in time he wouldn’t change a thing. Being almost paralyzed actually changed his life for the better.

The book is written brilliantly, telling the tale of the Norton family with the crux being that fateful day when Chris had his neck broken on the football field. The journey from the injury, to the initial care, to the mass rehab is told from both Chris’s perspective and that of his Dad, Terry.

You can clearly see that God had a plan for the Norton family and it only just started with his being injured. Only with God’s hand can a person overcome a 3% chance of ever moving again. I laughed, I cried, I smiled, I grew frustrated and I cheered both when Chris asked Emily to marry him and when he triumphantly walked across stage to get his diploma.

I don’t think 5+ stars is enough. Everyone should read this book. It will reach you in so many ways. This book had such an impact on me that I was personally excited to find out that Chris himself had emailed my wife. I would be so excited to receive an email from a man I consider a true hero. A fantastic book that has changed my life.

You have subscribed to alerts for Chris Norton.

You have been added to Chris Norton's favorite list.

You can also sign-up to receive email notifications whenever Chris Norton releases a new book.