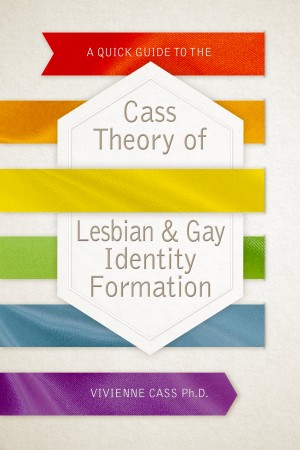 By Vivienne Cass Ph.D.
In this brief overview of her theory, Dr Cass integrates, for the first time, the many facets of her theory that have previously been dispersed throughout various publications. This book will be an excellent resource for researchers, educators and health professionals, both those new to the theory and those wishing to confirm their understanding of it. More
The Cass theory of lesbian and gay identity formation is well-known to those who work in the field of sexual orientation. Since it was first published over forty-five years ago it continues to form the basis of research studies, provide counsellors and therapists with a framework for helping them to work effectively with lesbian and gay clients, and to be part of training programs for health professionals. Increasingly it is being applied in developing countries as these absorb Western ideas about sexual orientation.

Although the Cass theory was presented over several articles and provides a multifaceted theoretical framework, many have narrowed their focus to its central idea, namely that the process of acquiring an identity of ‘lesbian’ or ‘gay’ can be viewed as a series of six stages. When this occurs, the process of identity formation is often disconnected from the larger theoretical and epistemological context in which it sits, leading to inaccuracies in the way the theory is interpreted.

Mindful of this problem, and also of the difficulty some international professionals and students of her theory have in accessing academic materials, Dr Cass has written A Quick Guide to the Cass Theory of Lesbian & Gay Identity Formation as a snapshot of her theory. In this short book she provides an overview of the theory, integrating, for the first time, all the different facets of her theory that have previously been dispersed throughout various publications. The source material is clearly identified so that readers can go to these references in order to obtain the full account of Dr Cass’ theory. As such it is an excellent resource for researchers, educators and health professionals, whether they are new to the theory or simply wish to confirm their understanding of it. As a bonus, Dr Cass also offers some new insights by addressing the various critiques of her theory and providing her response to each of these.
Available ebook formats: epub mobi pdf rtf lrf pdb txt html
First 10% Sample: epub mobi (Kindle) lrf more Online Reader
pdb
Price: $7.95 USD
Buy Add to Library Give as a Gift
How gifting works
Create Widget
Tags: gay homosexual lesbian identity theory counselling orientation stages cass sexial
About Vivienne Cass Ph.D.

Dr Vivienne Cass is a consultant clinical psychologist and specialist in human sexuality, who currently holds the position of Adjunct Associate Professor in the School of Public Health (Sexology Program) at Curtin University in Western Australia.
Her work in the area of sexual orientation emerged in the 1970s when she first began to develop her theory of homosexual identity formation. This theory was published in the Journal of Homosexuality in 1979. Based on this article, she was awarded the Theory Development Award from the Gay Academic Union of America (1979) and was nominated as a finalist for the Hugo Beigel Research Award offered by the Journal of Sex Research (1981). A number of other journal articles and book chapters followed this original article, further expounding the theory. Over the last thirty-five years, the theory has been cited consistently in research, used by health practitioners in their work with clients and taught by educators in the health and counselling fields. Dr Cass continues to engage in discussions on the topic of lesbian and gay identity formation with colleagues and students around the globe.
Dr Cass is also the author of two other BOOKS, The Elusive Orgasm: A woman's guide to why she can't and how she can orgasm (now in 7 languages) and There's More to Sex than AIDS: The A to Z Guide to Safe Sex (now out of print). She is the creator of a sex education APP, Explore Women's Sex, the first to be listed in the AppStore and has produced a set of sex EDUCATION POSTERS called The Illustrated Clitoris.
She also lectures in sexual therapy, presents conference papers, examines graduate theses, supervises other health professionals, reviews journal papers, mentors students and clinicians and provides media interviews. Dr Cass is currently working on a new theory in the area of attractions.

Reviews of A Quick Guide to the Cass Theory of Lesbian & Gay Identity Formation by Vivienne Cass Ph.D.

You have subscribed to alerts for Vivienne Cass Ph.D..

You have been added to Vivienne Cass Ph.D.'s favorite list.

You can also sign-up to receive email notifications whenever Vivienne Cass Ph.D. releases a new book.