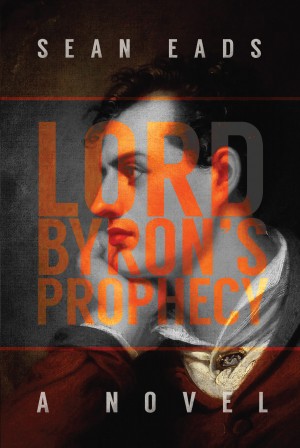 "A darkly hallucinatory and unsettling fever-dream of a novel, Lord Byron’s Prophecy offers doppelgängers, apocalyptic visions, ominous portents, and eerie hauntings as it recounts a centuries-spanning tale of guilt–and appetite–driven men whose suppressed secrets and illicit desires poison their own lives and those around them. With a kaleidoscopic, continent-crossing narrating technique that leap-frogs between 1816, 1960, 2010, and 2027; Sean Eads (The Survivors) makes a case—a gothic-veined and sporadically operatic one—for what Freud called the return of the repressed." - Brett Josef Grubisic for Lambda Literary

"...readers will be engrossed by Eads’s skillful weaving of the past and present through the troubled psychology of sympathetic, fully human characters." - Publishers Weekly

"Lord Byron’s Prophesy is a tale of layered times that all share the same lurking, dizzying madness. From Byron himself, to current-day Professor Fane, and to Fane’s son Gordon--all of these men are dipping into the same waters of vision and dread, unable to resist their own destructive impulses, despite a serious sense of doom. This is a book of poetry, prophesy, and the dangerous pitfalls of paternity; it leaves a reader hoping for sanity, but suspicious that it’s not in their stars." - L.A. Fields, Lambda Literary Award finalist for My Dear Watson

Originally from Kentucky, where he received a Bachelors and Masters degree in literature from the University of Kentucky, Sean Eads is now a reference librarian in Denver, Colorado. Besides writing, his interests include golf, two cats, and tasting new beers. His science-fiction novel The Survivors was a finalist for the Lambda Literary Award. His latest book, Lord Byron's Prophecy, is a finalist for the Shirley Jackson Award for Best Novel.

You have subscribed to alerts for Sean Eads.

You have been added to Sean Eads's favorite list.

You can also sign-up to receive email notifications whenever Sean Eads releases a new book.