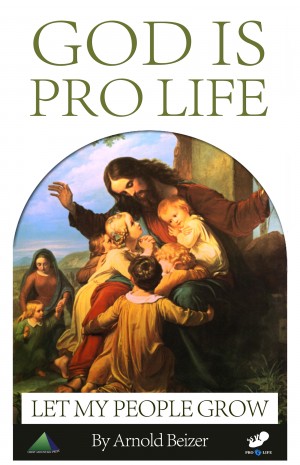 By Arnold Beizer
"God Is Pro Life" proves with irrefutable Biblical and medical evidence that a baby’s life begins at conception. Pro-Choice advocates are proven wrong on Abortion. God is the Creator of all Life and the life of a child miraculously follows a Divine calendar laid out in the Seven Feasts of Israel given to Moses in Leviticus Chapter 23. The Life of Jesus likewise fulfills the 7 Feasts of Israel. More
"God Is Pro Life" by author Arnold Beizer is a new concise book now available that proves beyond any doubt with irrefutable evidence that a baby’s life begins at conception. Facts show convincingly that proponents of Pro-Choice on the issue of abortion “rights” have made a wrong choice and are in error. Abortion on demand is against the Law of God and man helping you to Take a Stand. Unjustified Abortion is an abomination to the Lord. Astounding facts and hard evidence prove that God Exists as Creator of All Life, that He has a Master Plan for the Ages, that the Old and New Testaments go hand in hand and are the authentic Words of the Lord. Moreover, the author documents that Yeshua (Jesus) is who He claimed to be, in chapter and verse, namely Messiah and Lord of the Jews and Christians and God of the entire Universe.

Biblical, medical and scientific evidence together combine to show that the life of a child begins at conception and a mother’s pregnancy exactly follows by Divine Design the Seven (7) Feasts of Israel given by The Lord to Moses and inscribed in the Book of Leviticus Chapter 23. Amazingly it will be seen that the Feasts are a meticulous and miraculous exposition of how human life begins at conception and proceeds through the process of birthing acknowledging and glorifying the hand of the Lord as Creator of Life itself. The Life of Yeshua (Jesus) is shown to follow exactly the letter of the Law and to fulfill to the day the schedule of the Hebrew Seven Feasts of The Lord.
Available ebook formats: epub
Price: $0.99 USD
Buy Add to Library Give as a Gift
How gifting works
Create Widget
Tags: abortion abortion and politics prolife prochoice planned parenthood abortion debate abortion controversy medical abortion conception to birth conception issues
About Arnold Beizer

Arnold Beizer, a trial attorney is an author of several books and articles enumerated below. He is a Bible Prophecy and History research specialist and an ordained minister who has published authoritative works on the 10 Lost Tribes of Israel proving beyond a doubt that America and Britain are the chief 2 lost tribes of the house of Israel and brother nations to the Jewish nation of Israel that is the historic house of Judah.

"If You Don't Ask You Will Never Know" is his first book containing Biblical, historical and revelation knowledge much of which has never before been documented. A second book titled "Let My People Go" reveals the Truth about hundreds of American Prisoners of War abandoned by their government and left behind alive in captivity after the Vietnam War. The author uses Bible Code Research and other new and rare historical evidence to show conclusively that U.S. servicemen last known alive in captivity in S.E. Asia may still Survive.

The most recent book by Arnold Beizer, "Saved By The Bell" released in 2015 is a biographical picture book about World Heavyweight Boxing Champion Muhammad Ali fighting for the cause of Freedom for American POWS. It tells amazing stories in twelve (12) exciting rounds or chapters and exposes many previously untold truths. Never before published photos of the Champ taken by the author himself and new entertaining stories about Ali are included together with an exclusive Bonus DVD that chronicles for the first time on video the Champ's historic visit to Vietnam. A special Collectors' Edition is available in hard copy and an e-book version has just been made available to fans.

Arnold Beizer is also a music producer, promoter and former manager of the late great singer-songwriter John Whitehead of Philadelphia who received 3 Grammy nominations and is famous for numerous hit songs like "Ain't No Stoppin' Us Now", "Wake Up Everybody", and Backstabbers. Arnold also is an Executive producer and promoter of songs for Rita, Israel's Queen of Song whose new English language album "Heaven Sent" is being released in 2015.

As President of Let Freedom Ring, Inc., Attorney Beizer planned and organized a mission to Vietnam to search for answers as to the whereabouts of 324 American POWs last known alive, part of over 1,800 servicemen Missing In Action and unaccounted for from the Vietnam War. Arnold Beizer was accompanied among others by Carol Hrdlicka, wife of captured Air Force pilot, Col. David Hrdlicka and Albro Lundy III, son of missing pilot Major Albro Lundy, Jr. as well as former 3-time World Heavyweight Boxing Champion Muhammad Ali who volunteered to help find information for POW/MIA families about their loved ones. According to Mrs. Hrdlicka, there is ample documentary evidence in the hands of our government, proving David Hrdlicka and many other POWs were still ALIVE.

Let Freedom Ring, Inc. through the efforts of Arnold Beizer planned and promoted a POW charity benefit music concert with some of America 's finest singers to help highlight the plight of American servicemen still Missing in Action (MIA) from WWII, the Korean War, Vietnam and Operation Desert Storm.

Rita, Israel's Queen of Song traveled from her homeland to perform for the POW/MIA families, for prisoners of war everywhere and for Muhammad Ali and those in attendance at Philadelphia's historic and renowned Academy of Music concert hall. Music is the Universal language that reaches into the hearts of all peoples regardless of nationality, race or religion. People cannot be enemies as long as the music lasts. So let the music play. Sing "Let Freedom Ring."

Reviews of God Is Pro Life by Arnold Beizer

You have subscribed to alerts for Arnold Beizer.

You have been added to Arnold Beizer's favorite list.

You can also sign-up to receive email notifications whenever Arnold Beizer releases a new book.