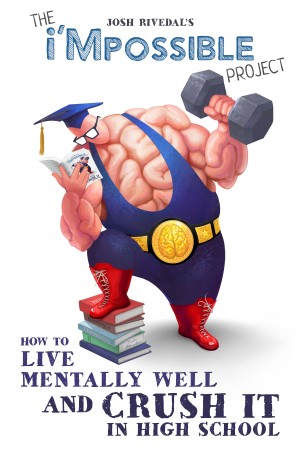 How To Live Mentally Well and Crush it in High School

Josh Rivedal (founder, executive director of The i'Mpossible Project) is an author, actor, playwright, and international public speaker. He has spoken about suicide prevention, mental health awareness, and diversity in more than ninety locations across the U.S., Canada, the U.K., and Australia. He has served on the board of directors for the New York City chapter of The American Foundation for Suicide Prevention. He wrote and developed the one-man play, Kicking My Blue Genes in The Butt (KMBB), which has toured extensively throughout the U.S., Canada, and the U.K. His memoir The Gospel According to Josh: A 28-Year Gentile Bar Mitzvah, based on KMBB and published by Skookum Hill in 2013, is on The American Foundation for Suicide Prevention’s recommended reading list. He writes for the Huffington Post. Coming soon in conjunction with The i’Mpossible Project: Living Mentally Well and Crushing it While in College, and Winning the War on Depression and Living Mentally Well.

You have subscribed to alerts for Josh Rivedal.

You have been added to Josh Rivedal's favorite list.

You can also sign-up to receive email notifications whenever Josh Rivedal releases a new book.