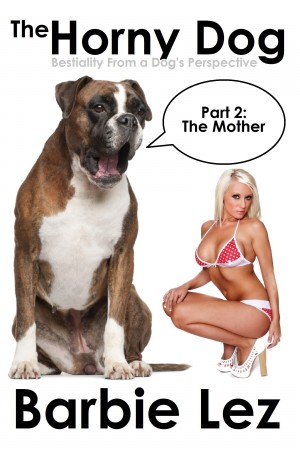 She didn’t say a word. She simply snapped her fingers and pointed to the ground before her. Forgetting about the injury I had been faking to keep Candy’s guilt working in my favor, I leapt off the bed and rushed over to her. Thankfully, the hysterical woman didn’t seem to notice. All she cared about was getting me out of her daughter’s room. At least that was the conclusion I came to when she crouched down and picked me up.

I couldn’t believe such a frail woman could lift me up. I wasn’t exactly a beast, but I easily weighted one hundred human pounds—I think. Still, Candy had no trouble carrying me out of the room, while using one of her feet to slam the door shut behind us.

I expected her to release me, but she carried me down the hall. I suddenly had a horrifying thought. What if she threw me out? I was not afraid of ending up on the streets as it was where I had spent most of my life, but I feared Candy’s anger would lead her to do something regrettable. What if she threw me out the window? Three stories stood between us and the pavement and such a fall would be fatal.

Many more similar outcomes flashed before my mind’s eye before I realized we were not heading for a window. Nor were we heading for the front door. Instead, Candy carried me to the bathroom. Once inside, she delicately placed me into the tub and hurried back to close the door.

My first thought when she turned on the water was that she was planning on drowning me. But all thoughts of death vanished when I looked up at her. She kneeled beside the tub, staring at me. The anger had left her eyes and a faint smile now curled her lips.

“What’s going on?” I wondered. Why wasn’t she angry at me? Why was she giving me a bath? Why was she being so kind?

She said something. I didn’t understand the words, but I easily deciphered their meaning. She didn’t blame me for what had happened between us. In her eyes, Barbie was the sole responsible. I felt bad for my young lover, but I knew there was nothing I could say or do that would change Candy’s mind. Still, I couldn’t help but wonder what would happen next.

My kinky tales remained trapped within my hard drive for years before an article about a self-published author becoming a millionaire convinced me to publish my stories. Within 24h, I had sold 7 copies. That was the start of my new life as a published author. As of this writing, I have sold 15 000+ copies and reached over two million readers worldwide. I have yet to make a full-time income from my passion, but I know it’s only a matter of time.

*Join the Newsletter at TripleErotica.com to get 3 FREE stories from my friends and me. You will also receive updates on new releases, as well as exclusive coupons and deals.

I’m a dog, but my breed is irrelevant. All that matters is that my life was about to change drastically. Being hit by a car should have killed me. Instead, it led to me living with two beautiful women. The first was a gorgeous, barely-legal teen. The second was her equally stunning mother. I knew I would be unable to resist my animalistic urges. The only question was: Which would I mount first?

You have subscribed to alerts for Barbie Lez.

You have been added to Barbie Lez's favorite list.

You can also sign-up to receive email notifications whenever Barbie Lez releases a new book.