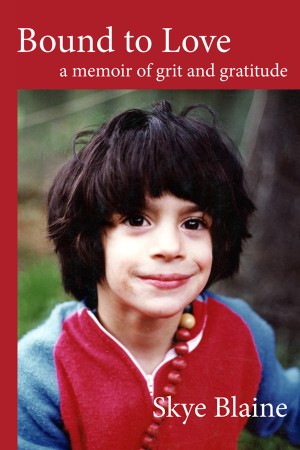 Bound to Love: A Memoir of Grit and Gratitude

By Skye Blaine
Bound to Love is the true story of a single mother who encountered and navigated a complicated nightmare for any parent. My child, the only child I could ever bear, was born with a life-threatening congenital heart defect, and suffered a more brutal health diagnosis soon after. Walk with me as I birth the courage and grit to meet Thom’s compounding challenges.
Available ebook formats: epub pdf rtf lrf pdb txt html
First 15% Sample: epub lrf pdb Online Reader
Price: $4.99 USD
Buy Add to Library Give as a Gift
How gifting works
Create Widget
Tags: courage disability parenting stroke gratitude handicap cerebral palsy addiction recovery raising a child with a disability congenital heart defect
About Skye Blaine

Amrita Skye Blaine writes short essays, memoir, fiction, and poetry, developing themes of aging, coming of age, disability, and most of all, the process of unlearning–the heart of the matter. In 2003, she received an MFA in Creative Writing from Antioch University. Her memoir manuscript, now titled Bound to Love, won first prize in the Pacific Northwest Writers Association 2005 literary contest.

She has had personal essays published in five anthologies, and in national magazines: “In Context” (now known as “Yes!” magazine) and “Catalyst.” Other personal essays have been published in the “Register-Guard” newspaper, and the “Eugene Weekly.” Skye also presented radio essays on KRML 1410 AM in Carmel, CA.

Reviews of Bound to Love: A Memoir of Grit and Gratitude by Skye Blaine

You have subscribed to alerts for Skye Blaine.

You have been added to Skye Blaine's favorite list.

You can also sign-up to receive email notifications whenever Skye Blaine releases a new book.