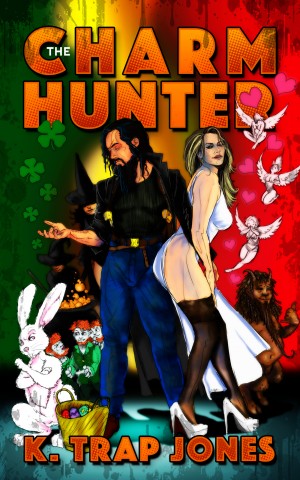 Offering Gus the job of a lifetime, Lady Luck sends him on a gore infested, chaotic adventure to recapture her seven lost charms. Within sadistic fairy tale worlds full of demented characters, Gus must wade through insanity in order to recover the charms while keeping his eye on the payout...everlasting luck.

“Irreverent, hallucinatory, and noiresque — and eye-poppingly hilarious in the stylistic presentation of its ultimately grim viewpoint. I’ve never laughed so uproariously at a tale so dark and pessimistic. This is genre-bending brilliance. Today, there’s a new generation of horror writers bursting onto the scene, and Jones is one of the leaders of the pack.”

— Edward Lee, author of City Infernal, Header, and The Bighead

K. Trap Jones is an American horror author of novels and short stories. His novel The Sinner won the Royal Palm Literary Award and appeared on the Bram Stoker Preliminary Ballot. Trap is known for his raw emotional and often depressive narrative horror dealing with the complications, conflictions and limitations of the human mind. He is a huge fan of narrative folklore, classic literary works and obscure segments within society. His writing style has been described as “filling in the gaps” and “walking the jagged line between reality and fiction.”

He was born on February 9, 1974 in Ogden, Utah. An Air Force brat, he has lived and traveled all over the world including England and Taiwan. Within the US, he grew up in San Antonio, Texas; Ft. Walton Beach, Florida; Belleville, Illinois and Clearwater, Florida. In 1996, he graduated from the University of Central Florida with a Bachelor’s degree in Business Administration/Marketing.

His novels include The Sinner, The Harvester and One Bad Fur Day. He has also written novellas that include The Drunken Exorcist and The King’s Ox.

Trap has written over 35 short stories that have been published within various anthologies including D.O.A. II—Extreme Horror Collection, Blood Rites: An Invitation to Horror, Fresh Fear: Contemporary Horror, Twisted Realities: Of Myth and Monstrosity, Legends of Urban Horror, and The Gothic Blue Book I, II, and III. In the Fall of 2013, his first short story collection The Crossroads will be published that includes 12 previously published works and 4 brand new ones.

His biggest writing influence was Dante Alighieri’s The Inferno and Edgar Allan Poe’s “The Tell-Tale Heart.” As a product of the ’80 s, he prefers his horror movies blood-splattered and his music heavy.

He is a member of the Horror Writer’s Association and can be found lurking around Tampa, Florida where he lives with his wife and three sons.

You have subscribed to alerts for K. Trap Jones.

You have been added to K. Trap Jones's favorite list.

You can also sign-up to receive email notifications whenever K. Trap Jones releases a new book.