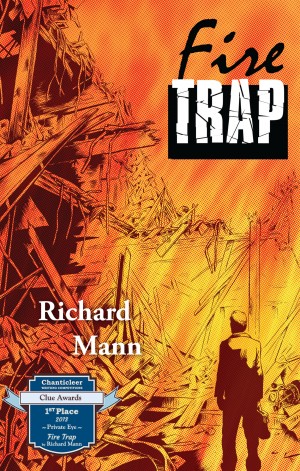 The principal scientist at Genetrix, a biotech startup, dies in a fire. Western Insurance must pay millions if the fire proves an accident. A beautiful venture capitalist and the striking daughter of a competitor help Randy untangle the lies and motives that created the fire trap in which the scientist died.

As an independent insurance investigator, Randy runs Justice Investigations out of a Portland, Oregon, theater he inherited from his folks. As a single parent, he must provide for Sally and Billy, his adventurous teenagers, keep the theater business afloat with the help of his director, Jasper, and his business partner, Arnie, and, at the same time, unravel the truth about the deadly fire at Genetrix.
Available ebook formats: epub mobi pdf lrf pdb txt html
First 20% Sample: epub mobi (Kindle) lrf more Online Reader
pdb
Price: $2.99 USD
Buy Add to Library Give as a Gift
How gifting works
Create Widget
Tags: romance thriller mystery detective book series scientist startup sleuth theater
About Richard Mann

Although originally from Western New York, I’ve spent my adult life on the West Coast, from Alaska to California, and currently reside with my wife, Ellen, in Portland, Oregon. I’ve manufactured Brazilian agate wind chimes, managed high-tech IT development groups, and had my own startup company.

I’ve self-published a 2013 Clue Award winning mystery, Fire Trap, and I’m marketing and editing my way through four other mystery novels in both an adult and a YA series. I’ve published short mystery fiction in Woman’s World and I’ve also published Mystery and Romance comics myself as Floating Dock Comics.

I’ve written seven feature length screenplays, all of which have either been optioned or received quarter finalist recognition in the Nicholl, Scriptapalooza or Austin screenwriting competitions.

One short screenplay, Pumpkin, was actually filmed. It’s production, on which I was Script Supervisor, was itself filmed for Little People Big World for TLC.

You have subscribed to Smashwords Alerts new release notifications for Richard Mann.

You have been added to Richard Mann's favorite list.

You can also sign-up to receive email notifications whenever Richard Mann releases a new book.