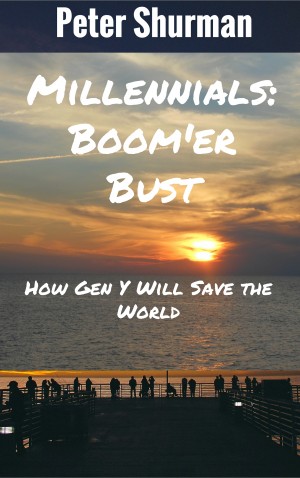 Millennials: Boom'er Bust or How Gen Y Will Save the World

By Peter Shurman
An interpretive 'quick-read' that explains why boomers have completely misunderstood millennials (Gen Y) and how this next big generation can fix everything...because (after all) they have to! A quick read in easy, narrative style...thought provoking and optimistic! More
Baby Boomers & Millennials need to understand each other - because they're just not getting along! "Millennials" are next in line but, unless aging boomers and millennials start to see each other as useful, the passing of the torch will be fumbled. The world can't afford that because millennials are indeed the "next big generation", the echo! They're the ones who must repair the accumulated damage and mistrust that threatens everything. Are they up to it?

This is a must-read 'primer'. It's a quick and easy read because the writing style is narrative and thought-provoking. Marketers, managers, bankers, automakers, financial services companies...even moms and dads need this book as a guide. If you're a boomer who believes millennials only want to text each other and become famous...or if you're a millennial who thinks boomers are just aging, egotistical boneheads, you're wrong and you need to read this book!

Millennials really can save the world. Millennials: Boom'er Bust won’t make you an expert but will help you to understand why your greatest dream at 30 was having a brand new Corvette, while your son’s is to have a great lightweight bicycle and your daughter’s is to own the latest, greatest smartphone and fabulous (sometimes rented!) clothes.

For a generation that knows it will have less, share more, live longer, and not receive much pension other than what it provides for itself, there’s a lot of change to digest. This book will help demystify the radically different view of the world millennials have.

If anyone has ever spent a multi-disciplined life trying to grapple with what people want and need, it’s the author, Peter Shurman, a broadcaster, politician, and executive coach. He’ll tell you why this huge echo of his own generation matters, politically, socially, and economically. The title’s double entendre, “Millennials, Boom ‘er Bust,” speaks to today’s reality as well as the past, and the subtitle, “How ‘Gen Y’ Will Save the World,” represents both a boomer’s question and his optimism.

Peter Shurman is a communicator whose unique ability is turning complex concepts into simple language and animating any discussion. As an elected politician, his prime role was in speaking both in and outside the Ontario Legislature about public finance.

Peter Shurman is fluently bilingual (English and French) with over 45 years of experience in broadcasting, personal presentation, consulting, and executive management.

With a strong background in change management, Peter was instrumental in key acquisitions for third party buyers and has also owned and operated his own successful communications business.

Following an extensive career in business, Peter returned to his radio roots in 2004 as one of Toronto’s leading talk show hosts, as well as a featured national radio and television commentator.

His exceptional leadership skills and experience in communicating with a variety of audiences made him a successful business entrepreneur and CEO, a leading member of the Ontario Legislature, a media personality, spokesperson, and a public speaker.

Peter Shurman maintains extensive and effective political and business networks and is leveraging his experience as an agent of positive change in business, the public sector, and now, as the author of “Millennials: Boom’er Bust”, a book about bridging the vast generational disparities between baby boomers and their direct echo, the millennials (Gen Y).

You have subscribed to alerts for Peter Shurman.

You have been added to Peter Shurman's favorite list.

You can also sign-up to receive email notifications whenever Peter Shurman releases a new book.