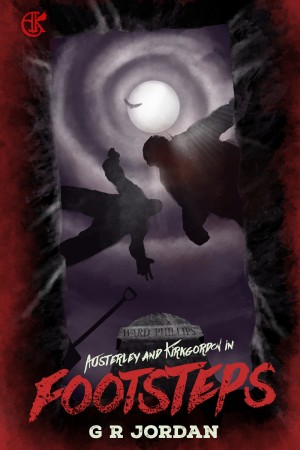 By G R Jordan
An insane professor. A journey into a New England grave. Will Kirkgordon return alive?

Kirkgordon gets his first taste of dark creatures in this first origin story from the A&K universe. If like you like action and adventure, dark creatures from beyond and cutting dialogue from antagonistic heroes then you’ll love G R Jordan’s A&K urban fantasy series. More
"I swear if I see Austerley again, I'll kill him myself. The man's a lunatic, and he wants putting down for the good of society - and his own good for that matter."

A retired protection operative, Kirkgordon's only mistake was to seek a little of the excitement his previous life had offered. Leaving his family behind, he joins Professor Austerley beneath a New England graveyard and fights horrors he could never have dreamed of. But while he seeks to extract his client from the madness, the Professor shows a hunger for things unholy, an insatiable appetite that chills Kirkgordon to the core.

"Footsteps" is the prelude to "Crescendo!", the first story in the Austerley & Kirkgordon series, and relates the tale of their first bizarre meeting from the perspective of a compromised Kirkgordon. Drawing on the Lovecraftian lore, this short tale introduces the reader to the conflicted pair, one desperately seeking the wonder of darker things, and the other, horrified by the wild chaos he has become involved in.
Available ebook formats: epub mobi pdf lrf pdb txt html
First 15% Sample: mobi (Kindle) lrf pdb Online Reader
Price: $1.49 USD
Buy Add to Library Give as a Gift
How gifting works
Create Widget
Tags: conflict protectionism miskatonic university graveyard investigation fun detectives lovecraft tale lovecraftian mythos prequel book adventure and peril in a fantastical world lovecraftian monsters
About G R Jordan

GR Jordan is a self-published author who finally decided at forty that in order to have an enjoyable lifestyle, his creative beast within would have to be unleashed. His books mirror that conflict in life where acts of decency contend with self-promotion, goodness stares in horror at evil and kindness blind-sides us when we are at our worst. Corrupting our world with his parade of wondrous and horrific characters, he highlights everyday tensions with fresh eyes whilst taking his methodical, intelligent mainstays on a roller-coaster ride of dilemmas, all the while suffering the banter of their provocative sidekicks.

A graduate of Loughborough University where he masqueraded as a chemical engineer but ultimately played American football, GR Jordan worked at changing the shape of cereal flakes and pulled a pallet truck for a living. Watching vegetables freeze at -40C was another career highlight and he was also one of the Scottish Highlands blind air traffic controllers. Having flirted with most places in the UK, he is now based in the Isle of Lewis in Scotland where his free time is spent between raising a young family with his wife, writing, figuring out how to work a loom and caring for a small flock of chickens. Luckily his writing is influenced by his varied work and life experience as the chickens have not been the poetical inspiration he had hoped for!

You have subscribed to Smashwords Alerts new release notifications for G R Jordan.

You have been added to G R Jordan's favorite list.

You can also sign-up to receive email notifications whenever G R Jordan releases a new book.