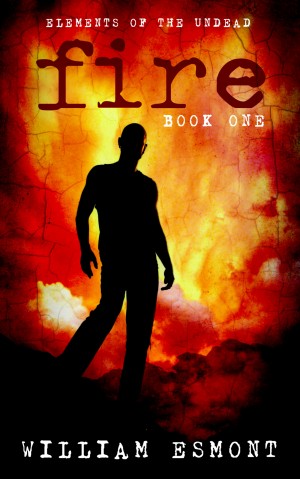 The Elements of the Undead:
Fire: The Collapse
Air: Mortal Choice
Earth: Desperate Measures
Water: The End of Us

William Esmont currently lives in the desert southwest. He is busy working on his next novel.

Also in Series: Elements of the Undead

Enjoyable, fast-paced story that should satisfy any zombie fan. Great writing, too.

This zombie apocolypse was great! The best one yet and I am just a couple of books into this genre.

The WORLD is suddenly overrun with zombies. One moment everything is fine, the next, you wife is trying to see what your eyeball tastes like. The military doesn't know what to do so, of course, they bomb the most populated cities in hopes of slowing down or killing the infestation.

Not all humans are dead, not all zombies are dead. How would you survive in this New World?

I admit it, I was skeptical. Then again, I thought that Twilight was fun, despite being badly written. Lots of things are entertaining without actually being good. So, I thought I’d give Esmont’s Elements of the Undead a shot. At least, it would be a diversion from daily life.

In all really satisfying science fiction or fantasy stories, paranormal archetypes (in this case, zombies) are symbols for bits or themes of culture or humanity about which we do not know how to discuss. The outlandishness of the apparent subject gives the audience permission to safely talk about troubling social issues. If the conversation gets too hot, someone can crack a joke about vampires or zombies or changelings or Big Brother. Everyone can save face and retreat into the social order they distrust. It is always about today, always about now, when the genre is correctly executed. If it is done badly, it is never more than an idle pastime and an object of ridicule. Done well, however, it can subvert existing power structures. It can become a cultural touchstone.

The popularity of superheros, paranormal heroes and villains, and artificial intelligence named “Hal” (or cars which park themselves and talk back to the drivers when they ask for a certain radio station) is not a fluke. It is a lightening rod for social psycho-analysis.

At the end of Fire, the narrator uses Megan’s point of view to say, “The undead were only a symptom, she had finally realized, a symptom of a broken society that would rather battle each other to the death than compromise for the greater good.” (Page 184.) Elements of the Undead is a commentary about what we have become, with our social media, hyper-violent entertainment, and bloated governments. We turn on ourselves, and devour senselessly, without meaning and without stopping.

If your taste doesn’t run towards the metaphoric, the series more than satisfies with quick pacing, lots of action, and just the right amount of detail. Esmont skillfully develops characters (even those who don’t live long) who mean something to us, and about whom we care. He weaves us around various geographical locations, introducing us to groups of survivors, and different manners of survival, some of which are as bad as the zombies themselves. Esmont does not sacrifice story for pacing, however, and while it is a violent novel, it is not unnecessarily gruesome. The real violence happens between people – and leads us to the book’s self-description: “tales of survival.”

By the end of Earth, book three, we still do not have a clear notion of what survival is or what death is, since very few things stay dead for long in this world. Elements of the Undead presents possibilities for what it might mean to be dead, or what it might mean to be alive, and thus offers a searing perspective on our treatment of each other in this, our zombie-free world.

It is a relevant tale in this age of online relationships and decreasing face time.

Lastly, the formatting and artwork of the book are beautiful. They add to the grittiness of the story, giving it the appearance of an old telegram with blood smears and crinkles. The e-version is good, but the paperback is lovely.

The Patriot Paradox (The Reluctant Hero, Book One)

While the threat of a zombie apocalypse is one that seems surreal there is a good chance it will begin and with little warning and with no cure. Book One details the initial spread and the first few months of survival after it begins. The interesting part of this tale with the use of military and nuclear weapons in trying to limit or destroy the threat, on US soil to say the least. This twist is not one I've seen played out in any format before. I liked it, made it far more realistic than other tales.

Yet while I enjoyed the gnashing of rotting teeth against fresh flesh the story was merely bones. There was little in character development or enough of any one storyline to find a connection with a key player. Perhaps this was intentional since anyone can be killed at any time but I felt it lacked a hook. Perhaps it was simply a line up for the next tale (it is Book One after all) however it left an empty feeling at the end and a 'meh' feeling for me to seek out the second book.

Overall not a bad tale of the end of the world and the zombie apocalypse, however better character connectino is needed to make it a re-reader.

Not at all sure what I expected, but the book is worth a read, particularly if you enjoy a good horror story. Esmont has a way of description that just pulls you in, and has you turning the pages.

Big fan of this book have never read a zombie book so glad this was the first. Wasn't at all what I expected great story lines all weaving together with excellent descriptions made this book very real can't wait to find out how it ends.

(reviewed 14 days after purchase)
Gail Ireland reviewed on Aug. 13, 2012
(no rating)
I am not a fan of horror, and this was definitely in that genre. I'm not sure what I expected - probably some fantasy scary story. I did not finish reading this book. I skimmed through and found mostly gore, so I put it aside. Not my cup of tea!

The very idea of zombies is the stuff of nightmares. Is it possible for the entire world to be blanketed within days by a virus that not only kills its victims but reanimates them and turns them into voracious killers, craving human flesh? It is the gritty reality of Esmont's world. This book is most unsettling. It positively undulates with tension and sets the stage for what I believe will be one hell of a battle. I look forward to the next segment in this tale of survival.

Starting off, I thought I was going to dislike this book. Boy, was I wrong. Esmont does a wonderful job at descriptive writing, and there were times I felt queasy just by that alone. His zombies offer a variety of characteristics, as do his characters. The characters each have a distinct role, even if they are to be killed off within their first appearance. My biggest issue, which really is small indeed, is that for the first book, it was never explained just exactly why everyone turned. However, I am looking forward to the next book in this series so that I can answer my burning questions (no pun intended). :)

I admit I thought that this would be the typical zombie apocalypse story; where a group of people fight zombies,themselves, and by the end of the book most of them are dead. I hate to say that my assumptions were wrong, but that pretty much sums up the book. However, Esmont weaves together such a colorful and un-cliche bunch of people that I was thoroughly entertained for the entire novel.

Despite having a huge cast of characters, there was plenty of screen time for each group. Although Megan was the main character, a hooker turned survivor leader, Jack was my favorite to read. I must say that Jack's episodes were so poignant and I wonder if I could of done the same necessary actions if I was in his predicament. Besides the zombies, this book claims an unusual villain - a military woman who makes a lot of bad decisions for her own survival.

What starts out as many different plot-lines and settings dwindles to one major one as the story is told. Necessary actions drive these characters from one chapter to the next. For anyone who knows zombie books and movies - necessary actions means shooting people in the head. That's the only way to kill these things and there is quite a bit of gore accompanying these necessary actions.

It's nothing unique to the genre, but for any fans of zombies, this story is told well. Its a good, quick read for anyone that enjoys their meat and books extra rare.

**I received a copy of this book from the author in exchange for an honest review.

You have subscribed to alerts for William Esmont.

You have been added to William Esmont's favorite list.

You can also sign-up to receive email notifications whenever William Esmont releases a new book.