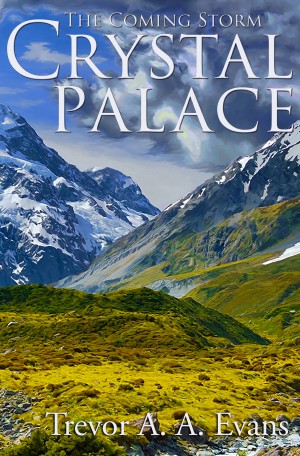 By Trevor A. A. Evans
War lurks in the shadows of Khyrah, a pristine mountain valley ruled by Adria's father, but the young princess cannot see that coming storm as she seeks a husband to someday rule by her side. As she does so, the valley's high-captain Alec must plot with the king to ensure that their land has a future, one that will be unexpectedly shaped by an obscure boy from the edges of the wilderness. More
Khyrah is a small kingdom in the western mountains, so small that it should hardly be of note, but because of its importance in the history and culture of Western Eretsfel, Khyrah, along with its rulers and emblematic Crystal Palace, has for centuries been considered the symbolic leader of the other much larger kingdoms of the West. Its role in the future of Eretsfel becomes uncertain, however, as a young empire from the East begins to cast a shadow over the rest of the world.

Adria, the princess and heir of Khyrah, is too young to see the coming storm for what it is and is more focused on a choice that she will soon have to make. As the oldest daughter of the king, it is her responsibility to choose a husband, the boy who will someday rule by her side. Over the next year, she will spend one day, and one day only, with each boy in the kingdom of her age so that she can reach a decision by the time she turns nineteen, but even a year before that on the eve of her eighteenth birthday, she fears that she may never be able to live up to all that is expected of her.

Meanwhile, Alec, Adria's much older, adopted brother and leader of Khyrah's small but formidable Valley Guard, hopes he can shield her from having to worry about more than her search as he and the king try to shape Khyrah’s destiny. Neither Alec nor the king could have ever predicted the role that an obscure boy on the southern edge of the kingdom will play in the plans they've set in motion.
Available ebook formats: epub mobi pdf rtf lrf pdb txt html
First 15% Sample: epub mobi (Kindle) lrf more Online Reader
pdb
Price: $5.00 USD
Buy Add to Library Give as a Gift
How gifting works
Create Widget
Tags: love kingdom war princess action adventure
About Trevor A. A. Evans

Trevor wrote a story for himself when he was young divided into three parts: go to college, become a lawyer, and be happy. But when the first part was done, he stood at the edge of a cliff, staring down into the despairing depths of part two, and thought, "Nahhh." Instead, he skipped right on over to part 3, which he discovered creating stories and worlds while marrying the girl of his dreams. At the ripe old age of 29 with plans to write new series in fantasy and science fiction, Trevor's just getting started.

Learn more about Trevor A. A. Evans

Reviews of Crystal Palace: The Coming Storm by Trevor A. A. Evans

You have subscribed to alerts for Trevor A. A. Evans.

Would you like to favorite Trevor A. A. Evans?

You have been added to Trevor A. A. Evans's favorite list.

You can also sign-up to receive email notifications whenever Trevor A. A. Evans releases a new book.