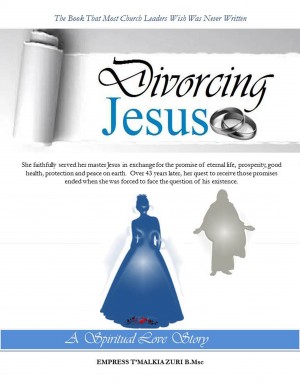 By T'Malkia Zuri
Rated 5.00/5 based on 3 reviews
She faithfully served Jesus in exchange for the promise of eternal life, prosperity, good health, protection and peace on earth. Over 43 years later, her quest to receive those promises ended when she was forced to face the question of his existence. More
Many who have never experienced the deep indoctrination of Christianity don't understand the psychosis behind it. Many don't understand how a woman can be so in love with an idea of a man that she is willing to turn her back on everything that she loves. Many don't understand how a man can cry from the depths of his soul about another man that he only heard about through hand-me-down stories and old books. Empress T’Malkia, a twice-ordained National Licensed Minister gives you a deeper look into the psychological aspects of Christianity and its influence on its followers.

T'Malkia faithfully served Jesus in exchange for the promise of eternal life, prosperity, good health, protection and peace on earth. Over 43 years later, her quest to receive those promises ended when she was forced to face the question of his existence.

This is not just her story, but the story of millions who are knowingly or unknowingly in spiritual bondage. Every Believer should read “Divorcing Jesus” because the candid recollection of T’Malkia’s spiritual journey is guaranteed to be relatable to all who are currently following the Christian Doctrine.

Just as well, Non-Believers should read “Divorcing Jesus” if they are having a hard time understanding how a person could be mentally and spiritually “caught up” in the idea of a man that they cannot see, touch, hear or feel.

T'Malkia Zuri, affectionately known by her friends, family, colleagues, and listening audience as Empress T, is committed to empowering and inspiring others to find their path toward a more stress-free, healthy and harmonious life, to inspire others to turn toward their path of spiritual growth, and to enlighten others to live their ultimate purpose of being.

Ms. Zuri transitioned out of religion during the winter of 2011 after forty-three plus years of indoctrination. She has devoted much of her time to sharing what she has learned. She was born and raised a Baptist, then converted to Pentecostal, then Islamic, then Hebrew Israelite, and finally non-denomination. She worked in every area of "ministry" after attending many classes and receiving certificates of completion. Over the course of about thirty plus years, she managed to be a member of the choir, the missionary board, the usher board; a Sunday School Teacher, Bible Study Instructor, Pastor's Aid/Armor Bearer, and a National Licensed/Ordained Minister under a commercialized organization. Ms. Zuri hosted the popular and controversial radio show "Life After Christianity 101" from 2012-2015. Her main objective is "NOT to convert people, but to encourage them to think outside of the box while provoking them to seek and study for themselves." One will often hear The Empress proclaiming: "Eye can't liberate you for YOU have to liberate yourself, BUT Eye can HELP you to BECOME liberated."

Ms. Zuri is the Founder and CEO of Griot Publishing House and Griot International, LLC as well as "The Write Cipher," an organization that assists inspiring/aspiring Writers in sharing their thoughts with the world. She is the Founder of GriotSites.com, a web hosting, and web design business that specializes in custom web designs, domain maintenance and more.
Ms. Zuri attended one of the largest Metaphysical schools in the world and obtained her Bachelors degree in Metaphysical Science; specializing in Holistic, New Thought, and Metaphysical Ministerial studies. In September of 2015, she completed a Hypnotherapy course and received her certificate in Basic Hypnotherapy. She is scheduled to receive her Doctrine in May of 2016 specializing in Transpersonal Psychology.

Ms. Zuri is in the process of establishing her own spiritual center called "The Spiritual Transformation & Restoration Center" where she will assist individuals on restoring and strengthening their Energy/Spirit Being. Affectionately known by some as "The Spirit Physician," Ms. Zuri vows to devote much of her energy to helping others to repair the spiritual damage caused by religion.

Last but not least, Ms. Zuri has authored 4 books: (2007) "Sister 2 Sister: A Treasured Gift/Repairing the GAP in Sisterhood, (2009) It's Mourning Time: Fasting the Spirit Man, (2013) He, She & Them: Restoring the Original Family" and (2015) Divorcing Jesus: A Love Story." She is also the Author of an upcoming book "There's Static in Your Connection" scheduled for the summer of 2016 as well as three other titles. Ms. Zuri desires to see restoration in families as well as healthy relationships that will strengthen the family structure.

Empress T's Divorcing Jesus has helped bring closure in several areas of my life that were left unaddressed in my life. Having been raised in the church, I too had many questions and sought answers wherever the facts chose to lead me. It was a difficult transition, but having read this book, I feel even more confident in my individual spirituality. What courage. Such honesty. This is truly a gift for generations to come. Thank you Empress T!

"Divorcing Jesus", is a very valuable and evocative read as Ordained Minister T'Malkia Zuri shares her journey with Jesus from the vulnerable beginning to the bitter devorce.
This book is a great mind opener for both christians as well as non-christians because most christians would be able to relate to and learn from her unbiased experience and non-christians can gain understanding and be more gentle and empathetic when helping a christian out of spiritual bondage."

(reviewed 27 days after purchase)
JannieRobinson reviewed on on Oct. 12, 2015

WOW!!!!!! Is all "Eye" can say Ms. Zuri. Your book was an AWESOME read! I had to get use to reading with the “Eye” instead of “I,” but I totally understand why you wrote it that way. I felt as if I was reading my own story. I left Christianity a little over a year ago after 14 years and it has not been easy. Your book left no stones unturned. Let's see what I can say about your book. Easy reading, (It took me approx. 2 hours to finish it). Heavy content: not only did you tell your story (transparently I might add) but you took the time to explain in depth the areas that needed explaining. And the links...I love the links because I could research the information for myself. I have more to say but I think that this is long enough. I just want to say THANK YOU for being so transparent and forthcoming about what really goes on behind the pulpit. "Eye" can't wait until your next book. J.R

You have subscribed to alerts for T&#039;Malkia Zuri.

You can also sign-up to receive email notifications whenever T&#039;Malkia Zuri releases a new book.