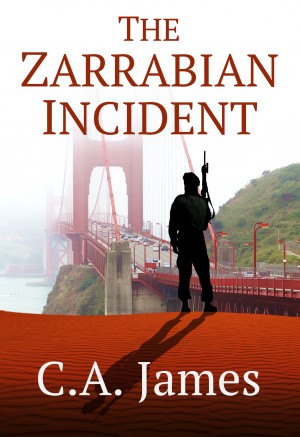 Colonel Ahmad Zarrabian never fails when he’s on a mission. And he’s not going to fail this one either—he has traveled from the rugged mountains and vast deserts of Iran to wreak his vengeance on America’s own soil. This one is personal.

When famed television reporter Christine Garrett is thrown face to face with Zarrabian, she finds herself inside the biggest story of her life instead of reporting it. FBI agent TJ McCaig, who is watching the clock tick toward a quiet retirement, finds himself inexplicably placed in charge of the case. What seems like a typical terrorist attack quickly deepens into a mystery as the case unravels into layers of deception and treason that could literally tear the nation in two. Who is the hero and who is the terrorist? Zarrabian forces McCaig and Garrett to face the blurry lines between terrorism and war, politics and business, and patriotism and treason.

Before embarking on a college career, C.A. James spent four years as a sailing instructor, boat builder, machinist, and carpenter, and had several deep-sea sailing adventures. These taught him the value of craftsmanship, the satisfaction that comes from quality work, and what it means to have real responsibilities. He also figured out that laboring in the hot sun can make college quite attractive.

Born and raised in California, James graduated from UC Davis with a degree in electrical engineering, and some years later earned his master's degree in Computer Science from Stanford University, thanks to a fellowship from Hewlett Packard Laboratories. It was while at Stanford studying artificial intelligence that James got his first inspiration to write a book.

Family and work took precedence for the next few decades, but in 2010 James' first book, "The Religion Virus: Why We Believe in God," was published by O-Books of London. James became a prolific blogger and wrote over five hundred articles about religion, morality, politics and related topics; the "best 99" of these became his second book, "Is Christianity Dying?"

"The Zarrabian Incident" is James' first work of fiction, with many more to follow.

In addition to his writing, James is an accomplished amateur guitarist, a tolerable clarinet player, a deep-sea sailor, and the father of three. In his spare time, he enjoys hiking and bicycling with his wife in the beautiful mountains and along the beaches of Southern California.

You have subscribed to alerts for C.A. James.

You have been added to C.A. James's favorite list.

You can also sign-up to receive email notifications whenever C.A. James releases a new book.