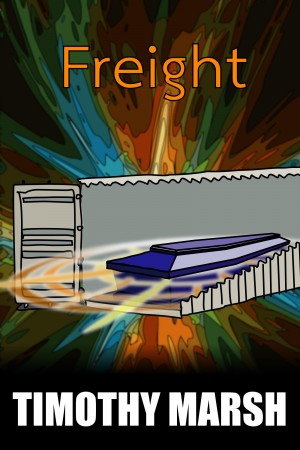 By Timothy Marsh
Freight is a 5,000 word short story set in the near future. Justin runs a freight forwarding company that uses phase-doors to move shipping containers between locations in the blink of an eye. It would seem the perfect transport system. He thought he had a perfect life. In the blink of an eye, things change. More
Timothy Marsh has shown deep perception into the human psyche, through his exploration of the central character. The device of science fiction is used to investigate what we are and what we may become if given a chance. By not mentioning any other new technologies or social changes, the author has set the story in a very familiar present, making it much more accessible to non–science fiction readers.

Freight is a great example of the balance that can be achieved in short stories between moving the story forward efficiently and still creating engaging characters and scenes. The smooth writing style and natural dialogue make for a good fast read. The ideas that are played with gives the reader more of a glimpse into themselves than the future.
Available ebook formats: epub mobi pdf rtf lrf pdb txt html
First 75% Sample: epub mobi (Kindle) lrf more Online Reader
pdb
Price: $0.99 USD
Buy Add to Library Give as a Gift
How gifting works
Create Widget
Tags: spiritual awakening speculative fiction truth identity meaning of life specfic rebirth guru spiritual adventure
About Timothy Marsh

Timothy Marsh is a fiction novelist who cut his teeth writing short stories in the speculative fiction genre. His first novel, The Ghost of Newsangtown, is a thriller suited to young adult readers and is set in a contemporary city. His next novel, Tiphany Cuts Loose, is a rollicking sea epic set in a 17th century still populated with witch doctors, zombies, vampires, and clockwork soldiers. As an Australian born in the late sixties, his voice is both direct and laconic. Because the protagonists from his first two novels are female, he utterly fails to see how his gender has effected his writing.

Timothy lives in Cambodia with his partner and considers it legitimate to say he is a full-time writer even though considerable amounts of his time are spent at the beach, and learning the local language. Social justice, environmental issues, and the efficiency of systems all push Timothy to follow politics and advocate for better policy through social media. He also finds playing instruments, dabbling in art and writing software all compete for a slice of his time. Sometimes he does a bit of cooking.

Reviews of Freight by Timothy Marsh

You have subscribed to alerts for Timothy Marsh.

You have been added to Timothy Marsh's favorite list.

You can also sign-up to receive email notifications whenever Timothy Marsh releases a new book.