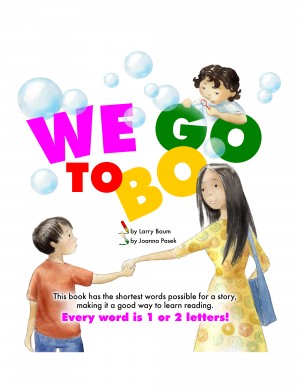 We Go To Bo

By Larry Baum
Rated 5.00/5 based on 3 reviews
This book has the shortest words possible for a story, making it a good way to learn reading. Every word is 1 or 2 letters. More
The first step in learning to read is a big one: from single letters to whole words. That's a lot to ask of young children. To make the transition to reading as simple and easy as possible, why not use the shortest words possible, at least in the very first books that children read? How short can words be and still make a story? Four letters, three letters? How about two letters? We Go To Bo uses words of no more than two letters to tell a very simple story, with characters, action, and humor, to help young children cross the threshold into the world of reading.
Download: epub mobi (Kindle) pdf more Online Reader
lrf pdb txt
Price: Free! USD
Add to Library
Create Widget
Tags: children picture book childrens reader reader for beginner
About Larry Baum

I grew up in Los Angeles, studied at Harvard College, and earned a PhD in Neurosciences at the University of California, San Diego. I then worked as a biologist doing research on Alzheimer's disease and other brain diseases. Now I live in Hong Kong, where my children Ryan and Ianna were born in 2003 and 2005. When they were old enough to start reading, I looked for children's books with simple words so that learning would be easier. But all the books I found had a mix of short and long words. I wondered whether I could write a children's book with only short words. Using words no longer than 4 letters would be feasible. What about 3 letters? That should still be doable. Two letters? That would be a big challenge, but I tried and came up with "We Go To Bo." After being too busy with work for several years, I finally decided to hire an illustrator and publish an ebook myself, making it free so that as many children as possible could benefit from it. Joanna Pasek's charming illustrations caught my eye, and we completed the book in October 2015.

After I self-published it, teachers told me that reading would be even easier if I used only simple sounds and if each letter corresponded to only one sound throughout the book (for example, if “O” were always pronounced with a long “o” sound). That got me thinking about writing a new 2-letter word book with these improvements.

Meanwhile, at a public reading of “We Go To Bo,” I asked the children if someone could write a book with only 3-letter words, and they said yes. 2-letter words? Again yes. And then one smart aleck said 1-letter. My first impulse was to ignore him, but then I thought, “Why not 1-letter?” If I use “C” to mean “see” and “U” for “you”, maaaybeeee. So I combined the ideas for a new 2-letter word book with a 1-letter word book, and added a 3-letter word book for a 1-2-3 trilogy. 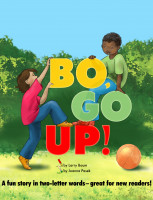 Another book in the Bo series. Once again, the author found a way to create a credible story out of 1 and 2 letter words. We Go To Bo teaches children more letters and words to keep moving them along in their learning process.

This beautifully illustrated picture book is a valuable addition for libraries, parents, and teachers.

Great work! Helping me a lot in my English teaching here in China.

(review of free book)
siuho reviewed on April 5, 2016
(no rating)
My boy finds the story very interesting.
And he likes the pictures too.
Thank you very much!

This is a great little book! Both the words and the illustrations.
2 letter words are indeed a challenge.

You have subscribed to alerts for Larry Baum.

You have been added to Larry Baum's favorite list.

You can also sign-up to receive email notifications whenever Larry Baum releases a new book.