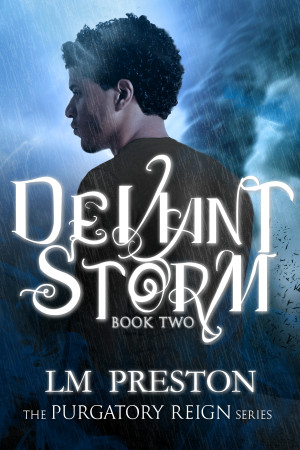 By LM Preston
Rated 5.00/5 based on 1 review
The battle is on. Peter Saints thought he'd killed It. But bad people never stay down. Now the jail of his enemy is weakening. Luck is running out for Peter and the girl he saved by wagering the Earth. Only now, with each second and secret revealed, his enemy gains the answers to destroy Peter and devour the world. More
DEVIANT STORM: Book 2 in the Purgatory Reign Series by LM Preston

LM. Preston was born and raised in Washington, DC. An avid reader, she loved to create poetry and short-stories as a young girl. With a thirst for knowledge she attended college at Bowie State University, and worked in the IT field as a Techie and Educator for over sixteen years. She started writing science fiction under the encouragement of her husband who was a Sci-Fi buff and her four kids. Her first published novel, Explorer X - Alpha was the beginning of her obsessive desire to write and create stories of young people who overcome unbelievable odds. She loves to write while on the porch watching her kids play or when she is traveling, which is another passion that encouraged her writing.

This was a great part 2 to the Purgatory Reign series. I was not disappointed.

The story starts right up where the first book left off, which was nice. Not a lot of stuff to catch up on before the story can progress. And the story progresses relatively quickly. However, demons and secret societies ... That stuff generally doesn't allow stories to drag on. This one is no different.

Peter is, of course, the main character we focus on in this book, just like the last one. He's still pretty moody and broody, but it's not like his life is all sunshine and roses, either. No parents, plus supernatural powers. Plus, his girlfriend was kidnapped, so he's kinda got a lot to deal with. However, just like in the last book, he's not just taking it sitting down. He's determined to fix it, even if it gets him killed. Fortunately, he has a handful of friends willing to help him out, even if sometimes he doesn't want them to.

I don't want to give away a ton of spoilers, but one thing I will say is that you really need to read the first one before you read this one. You will be completely lost within the first few chapters if you don't. Because this picks up right from the end of book 1, information that you need to understand book 2 is going to be in book 1.

This series is pretty dark, but it's not too dark. I'd still allow my older kids to read it. In fact, my oldest currently has the first one, as I type this.

There aren't a lot of authors that I will read, no questions asked. This is one of them. Every book she's ever written seems to cheer me up on bad days and make good days that much better.

You have subscribed to alerts for LM Preston.

You have been added to LM Preston's favorite list.

You can also sign-up to receive email notifications whenever LM Preston releases a new book.