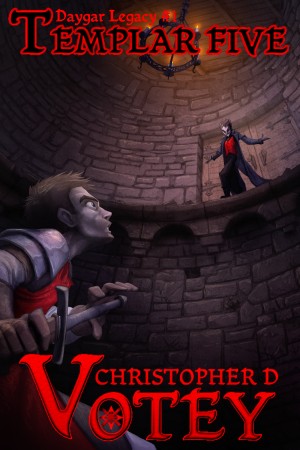 Vampires have ever only been a nuisance. But now, they are spreading a deadly disease killing in the thousands. Five knights set out to stop them, five who stand as the last of the Templar Order. After meeting with an unlikely ally, they must now do the impossible: Capture a vampire alive.

Set out across Medieval France, as the Templar Five face off against monsters in the shadows and within. More
In the 14th century, Vampires are spreading a deadly disease, and all that stands between them and human annihilation are five young knights who seek to stop them at all cost.

On a mission of diplomacy, to ask help from an unlikely ally, their bluff was called, and now they must produce evidence they don't have.

The Pope is dissatisfied with the knights, but has a plan to fake the evidence, but it will involve doing the impossible: Capturing a Vampire.

The last remnant of the Templar Order, with help of a new recruit, once again must travel in a plague ridden world, and face off against monsters that lurk in the shadows and within the group itself.

Chris has lived most of his life with a strong passion for story, whether in movies or the written form. He dedicates his life to the study of story, always learning how to be better.

In 2012, he suffered a work-related accident that left him permanently disabled. Writing is the only thing he can do as a means of financial support. When he is not writing, he is writing articles on his website, hanging out on twitter, and reading anything he can.

Chris is also known for his Worldbuilding series. It features over 20 articles going over geography, resources, technology, and a variety of other subjects. It also features a map making tutorial for writers who don't know how to draw.

Chris has written 4 books so far, and been a part of a compilations of authors.

About the Series: Daygar Legacy

Follow the journey of Knights battling Vampires who are spreading the bubonic plague.

You have subscribed to alerts for Christopher D Votey.

You have been added to Christopher D Votey's favorite list.

You can also sign-up to receive email notifications whenever Christopher D Votey releases a new book.