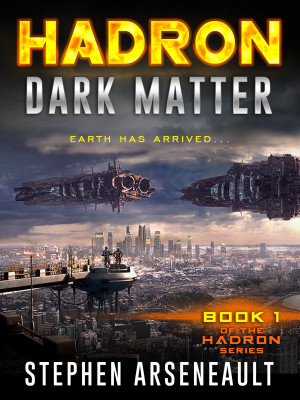 By Stephen Arseneault
In this first devastating book of the HADRON series, a small group of citizens take control of their own destinies when Earth's relatively tranquil existence is shattered by a new reality... our galaxy is a hostile, unforgiving place. Can we survive a collapsing civilization before our true enemies even arrive? Find out now by grabbing your free copy of HADRON Dark Matter today! More
The infrastructure that enables our civilization, power, and communications, is nullified. Billions die from starvation. Life on Earth is shaken to its core... Grab this first exciting book today and see just how bad it gets!

As altruistic as most of us believe ourselves to be, we would rapidly become our own worst enemies. In the event of a collapse, how far would you be willing to push your morals to survive? To feed and shelter your family?

After scientists using the Large Hadron Collider discover dark matter, the world is plunged into chaos. Massive waves of electromagnetic interference, coming from space, take out all grid power and forms of communication the world over. Cities go dark, food and clean-water supplies are quickly used up. Marauders rule the highways. Fearing invasion, our militaries are ordered to stay at their bases. Our politicians go underground.

This eight book adventure begins as a modern day, Human survival story and then morphs into an all out fight for rule of our section of the Milky Way. If you love reading apocalypse-turned-science-fiction, and reading late into the night, this saga was made for you! Are you a survivor?

What are readers saying?
--I read the entire eight-novel HADRON series in six days. I couldn't stop reading even when I needed more sleep.--
--Stephen Arseneault has written a story that's hard to put down; with believable, well-crafted characters and believable scenarios of normal people caught in desperate circumstances. I like this first book so much I plan on ordering the entire series.--
--I liked it and it terrified me. As I read I know that this is exactly where the world will be in a short time. Made me realize I need some well armed and skilled friends--
--I normally only read hard sci-fi. After reading the 1st HADRON book, I still wasn't sure this was for me, but I had to find out what was happening next. Believe me, this story just keeps getting better and better!--
Download: epub mobi (Kindle) pdf more Online Reader
lrf pdb txt
Price: Free! USD
Add to Library
Create Widget
Tags: scifi military science fiction aliens action thriller series apocalyptic galactic empire scifi action adventure adventure space
About Stephen Arseneault

About the Series: HADRON 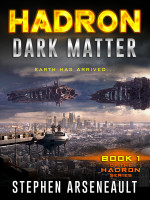 Experiments using the Large Hadron Collider produce the verifiable discovery of dark matter. Within days of this momentous accomplishment, Earth is inundated with wave after wave of intense electromagnetic radiation. Scientists haven't a clue as to why.

Globally, power systems fail and modern communications cease to exist. Civilization quickly falls into chaos as both food and freshwater supplies run short. All security becomes local. Survivors will be those who are willing and able to protect and feed themselves.

Small towns are cordoned off. City blocks become fiefdoms. Thousands of skirmishes take place on a daily basis in cities across the globe. Militaries, without clear orders from the top, take stand within their bases while only looking to defend themselves and their families. Without order, national governments cease to exist.

This first book in the HADRON series follows one group of citizens as they make every effort to overcome the madness that ensues. Little do they know, their fellow Man is not their true enemy. A sinister species waits in the heavens above. For those who remain alive, the term survival-of-the-fittest will take on an entirely new meaning... 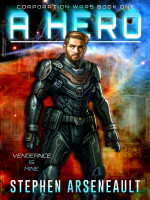 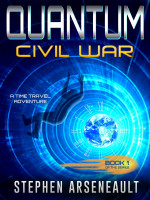 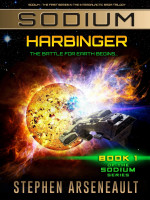 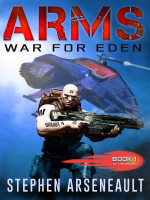 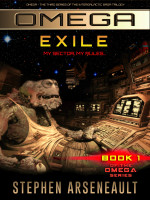 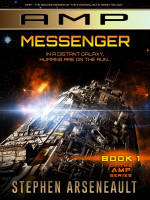 Review
Hannes Birnbacher reviewed on June 23, 2016
(no rating)
Oh, great, a new Arseneault! Arseneault is the specialist for exciting fiction (have purchased a lot from him of the former series), and he does not disappoint in this novel. There is action, action, action.
The science part in "science fiction" in HADRON Dark Matter (considered by itself, without consideration of the following books of the series), however, is a fake. There is a world-wide power blackout, which is somehow attributed to an experiment at Swiss CERN. Without further explanation, this brings the spontaneous lineup of criminals tied with it and furthermore, government, military and police immediately cease all their activities.
The book lives from it's action, it's dialogues and people are portrayed credibly. There is, however, a bit too much violence for my taste. The good boys shoot the bad ones by dozends at one time, having thankfully just an armored mobile home with huge inventories of weapons and ammunition at hand, and for heavens sake, at one point stack the dead bodies in heaps of ten each at the roadside, for the coroner.
"Hadron" would get a rating of three from me, which is very high in my system (four and five being reserved for the best contemporary SF respective best literature of all ages) but for this excess of violence, therefore it's two stars noted in my computer. (For SF, I almost never give ratings in smashwords, because everybody else will give five stars for the pretty good authors and I found myself actually decreasing the average for those authors I liked best).
The last approx. ten pages are a sample of Hadron II, which is not too much (I had books where the actual text was a short story one tenth only, the rest always the same preview). Furthermore, the preview does not end with a cliffhanger, but does explain what Science Fiction plot the reader can at last expect from the series.
Thank you, Stephen.