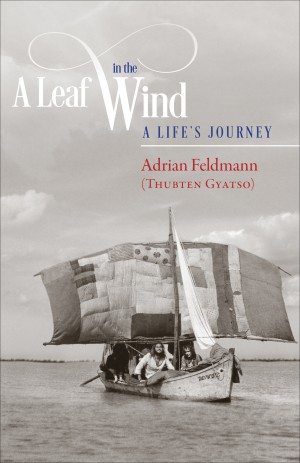 A Leaf in the Wind: A Life's Journey

By Venerable Adrian Feldmann
This personal account of one man's search for happiness is often humorous and sometimes shocking. Adrian Feldman doesn't shirk revealing the mistakes and failings which help to highlight his personal message of hope. His spiritual path is a quest to "slay the ego," and his life story is a parable for modern times. More
Born in Melbourne in 1943, Adrian Feldmann was one of the first Westerners to become a monk in the Tibetan Buddhist tradition. On the eve of a three-year, solitary meditation retreat, he recounts the inner and outer journeys that lead him to Nepal where, in the early 1970's, he met two Tibetan lamas, Lama Thubten Yeshe and Lama Zopa Rinpoche. They were among the first lamas to teach Buddhism to Westerners.

In the 1970's, Adrian Feldmann was a young doctor wrapped up in the hippie counter-culture, experimenting with mind-altering drugs and studying Eastern mysticism. Seeking a greater purpose to his life, he began to travel. Following his friends on the hippie trail, he travelled through Afghanistan where he was impressed by the spiritual power of Islam. Inspired by his reading of Taoist philosophy, he and some friends bought a converted rowing boat and sailed down the Indus River, searching for freedom and a more authentic way of living. What he found launched him on the spiritual path to Buddhism.

This personal account of one man's search for happiness is often humorous and sometimes shocking. Adrian Feldmann doesn't shirk revealing the mistakes and failings which help to highlight his personal message of hope. He wants us to know that the ego undermines our happiness and fortifies our habitual, destructive emotions. His spiritual path is a quest to "slay the ego," and his life story is a parable for modern times.

This title was first published in 2005 by Lothian Books as a paperback book. This updated ebook version is published by the Lama Yeshe Wisdom Archive and includes a postscript from the author recounting the continuing saga of his spiritual path.

The Lama Yeshe Wisdom Archive is a non-profit organization established to make the Buddhist teachings of Lama Yeshe and Lama Zopa Rinpoche freely accessible in many ways, including on our website for instant reading, listening or downloading, and as digital and printed books. Our website offers immediate access to thousands of pages of teachings and hundreds of audio recordings by some of the greatest lamas of our time. Our photo gallery and our ever-popular books are also freely accessible. You can find out more about becoming a supporter of the Archive and see all we have to offer by visiting the LYWA website. Thank you!

Born in Melbourne, Australia, in 1943, Dr Adrian Feldmann graduated from the University of Melbourne with a degree in medicine. After practising medicine in Australia and England, he travelled through Afghanistan, Pakistan, and India, eventually finding his way to a Tibetan monastery in Nepal.

After intensive study and meditation, he became ordained as the Buddhist monk, Thubten Gyatso. Since then he has run a free medical clinic in Nepal, taught Buddhism and meditation in many countries, and established monasteries in France and in the country town of Bendigo, outside Melbourne.

In 1999, he was asked by his teacher, Kyabje Thubten Zopa Rinpoche, to go to Mongolia and help establish a new Buddhist centre. Mongolia was emerging from seventy years of communist rule, during which the Stalinist purges of the 1930s virtually extinguished the traditional Mongolian Buddhist culture. He was well received in Mongolia where, apart from the classes he gave at the new centre, his teachings were presented on radio and television and published in the local newspapers.

23,000 copies of the Mongolian translation of the first edition of this book have been distributed, mostly free of charge, and it has become one of the most popular books on Buddhism in Mongolia. After leaving Mongolia in 2003, Thubten Gyatso built a cabin in the Australian bush where he meditated in strict isolation from the world for three years.

You have subscribed to alerts for Venerable Adrian Feldmann.

You have been added to Venerable Adrian Feldmann's favorite list.

You can also sign-up to receive email notifications whenever Venerable Adrian Feldmann releases a new book.